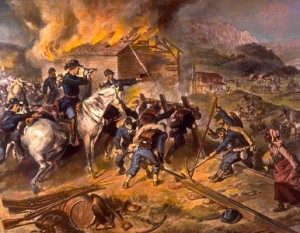 I finally had a chance to see the movie Wicked Spring. This is a low-budget production that managed to win a few independent film festival awards.  The movie tells the story of six soldiers, including three Confederate and three Federal soldiers, who spend the night together following the first day’s fighting at the Wilderness in May 1864.  The gist of it is that they don’t realize they are encamped with the enemy.

I can’t say that this was the most exciting or even interesting war movie of late, but given the crap that has been produced in recent years it is a breadth of fresh air.  The battle scenes were done effectively in that you actually see men shot in battle.  Think about it, how many men in Gods and Generals are actually shot?  Yes, many fell down in dramatic fashion, but did you actually see anything penetrate clothing or skin?  The director vividly captured the confusion of battle in the Wilderness and the perspective of the individual soldier.  A few of the battle scenes reminded me of Spielberg’s Saving Private Ryan.  Again, you have to remember that this is an independent film with a limited budget of $500,000.  No Ted Turner behind this one.

The most interesting part of this movie, however, are the scenes that take place overnight once these six men have decided to spend the night together.  There is a very touching scene between a Union and Confederate soldier which involves the former writing a letter for the latter.  The Confederate soldier has kept a pile of what appears to be pristine envelopes and letters owing to the fact that he can’t read.  This soldier dictates a very emotional letter home to his “sweetheart.”  There is nothing contrived or pretentious about these scenes.  No one mentions Grant, Lee, Lincoln or Davis and no one is debating what the war was about.  What you are left with is a group of tired soldiers who are trying to take advantage of a few quiet hours before hell breaks loose again in the morning.  It’s nice to see that the Civil War can be taken seriously in movies.