Thinking About Eyes On The Prize 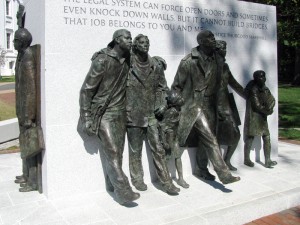 Some of you are no doubt watching the wonderful Civil Rights Documentary Eyes on the Prize which is airing this week on PBS.  I’ve watched it a number of times and have used segments in the classroom, but every time I view it I am transfixed by the images and especially the interviews.  Last night included segments on the Lunch Counter sit-ins and Freedom Rides [I highly recommend Ray Arsenault’s new study of the Freedom Rides which was released last year by Oxford Press.]  New Kid on the Hallway offers a nice summation of my own thinking when it comes to understanding the Southern white perspective:

Total non sequitur, naive white liberal guilt variety: I’m watching Eyes on the Prize, and it just kills me to watch a bunch of smug white people – which, in general, is a group to which I belong – cheerfully defending their resistance to civil rights as if such resistance is absolutely natural and right. The scary thing is that to them, it was. They’re so cheery about it because they’re so secure in this belief that they can’t even take the contrary seriously. It always scares me to think, if I had grown up in the south during the period of Jim Crow – would I have supported segregation? I mean, if I’d been taught from childhood that it was “right” and “natural” that people of different races should live separately, how much would it have taken to convince me otherwise? Because there were plenty of evil, evil people who supported segregation. But I’m sure there were plenty of ordinary, reasonably good people who did, too, just because it was the way it had always been, and they probably thought that if that was the case, there must have been a reason for it.

And you know, none of this happened very long ago.

When I watch those interviews I almost want to reach into the television and shake those people into my world or what I assume is some semblance of rationality and understanding.  The challenge, of course, is to appreciate that white Southerners (“ordinary, reasonably good people”) were working through new and difficult experiences based on their own racial assumptions and a Jim Crow legal system that was taken for granted.  In short, what they considered reasonable or rational.  New Kid highlights what for me is the moral backdrop of my own interest in reading and researching the past, and that is the role of luck.  We need to be reminded that much of what goes into our “selves” or personalities involves a set of conditions that we have no control over, including when, where, and to whom we are born.  History provides an arena for thinking about moral case studies that are not so removed from what we consider possible behavior once the role of luck is acknowledged.  [Psychology also provides examples, most notably Milgram’s famous experiments on obedience to authority.]  Would I have supported segregation if a few conditions had been changed?  The answer is more than likely YES.  And that is why it must be understood.  Thinking about history in this way brings me closer to people that for moral reasons I am tempted to push away psychologically.  To run the risk of sounding philosophically vague, and borrowing a phrase from one of my undergraduate professors, the realization is that I AM THAT PERSON.

Next post: Top 10 Causes Of The Civil War (SCV Style)