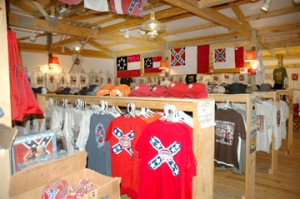 Charles Bowery commented earlier today that he was curious re: Brag Bowling’s reference to “the good general Confederate community.”  Who does he have in mind?  More importantly, we might ask what Bowling’s vision for the Museum of the Confederacy involves.  Thanks to Brooks Simpson who sent along the following link we have a clear statement from Bowling himself that goes back a few years to the Lincoln-Tad statue at Tredegar.  This passage appeared in The Weekly Standard:

“Ten years ago I started to learn about my family. I read intensively, everything I could–not just politically correct history but also other history that’s been suppressed. That’s the way this learning process often starts. My great grandfather served in the Army of Northern Virginia as private under General Robert E. Lee. He was at Sharpsburg–Yankees call it Antietam–at Chancellorsville, other places. And like 90 percent of the soldiers who fought for and served the South, he never owned a slave.

“So–just to show you how the thought process works, for people who are still capable of thinking for themselves–so I thought, well, why is that? If the war is all about slavery, why’s he fighting so hard? It didn’t fit, you see, with everything I’d been taught about the Civil War. Like all his comrades, my great-grandfather gave everything he had. Why? He did it for his country. The South had bad everything–bad munitions, bad clothing, bad food. But they had the best men. They gave everything they had. And they did not do that to defend slavery.”

The war wasn’t about slavery for Lincoln, either, Bowling explained. He ticked off the particulars of his indictment of Lincoln. With his generals he invented the concept of Total War, and waged campaigns of unprecedented savagery against noncombatants and private property in the Shenandoah Valley, the March through Georgia, and elsewhere. He was the father of Big Government, vastly expanding the reach of Imperial Washington in ways unthinkable to the country’s founders. The Northern victory was a triumph for a commercial culture, controlled by Big Business, over a Southern culture of farms and small towns that asked only to be let alone.

“It was all about power,” he said. “Six hundred thousand dead. All so Lincoln and his friends could consolidate their power to tell other people how to live their lives.”

I can just picture the special exhibit on slavery.  Thanks again Brooks.