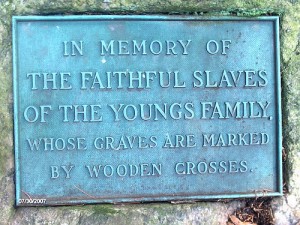 It’s Friday afternoon and I am sitting in my office waiting for the bus that will take me and 40 students to Harrisonburg where we will attend an awards event for Archbishop Desmond Tutu.  I picked up Micki McElya’s new book, Clinging to Mammy: The Faithful Slave in Twentieth-Century America (Harvard University Press, 2007) and am making my way through the introduction.  I came across this interesting passage:

The myth of the faithful slave lingers because so many white Americans have wished to live in a world in which African Americans are not angry over past and present injustices, a world in which white people were and are not complicit, in which the injustices themselves–of slavery, Jim Crow, and ongoing structural racism–seem not to exist at all.  The mammy figure affirmed these wishes.  The narrative of the faithful slave is deeply rooted in the American racial imagination.  It is a story of our national past and political future that blurs the lines between myth and memory, guilt and justice, stereotype and individuality, commodity and humanity. (pp. 3-4)