Acknowledging Martin L. King Through Others 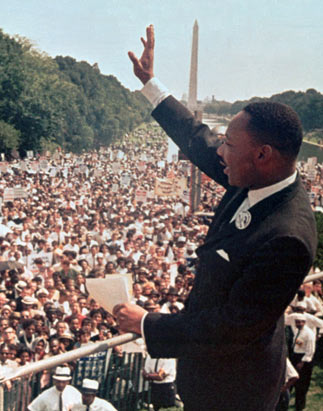 Martin Luther King Day has become too fashionable.  At its worst it reinforces a skewed memory of the Civil Rights Movement as beginning with his organization of the Montgomery Bus Boycott in Montgomery, Alabama in 1955 and ending with his assassination in 1968.  It also obscures the complexity of organization on the grassroots level and the fissures that existed within the movement that followed generational, geographic, and gender lines.  King’s words are no doubt stirring and his actions are a model of civic dissent, but we run the risk of reducing the struggle for civil rights and its importance to the broader narrative of freedom down to a few choice lines and poor generalizations.
I want to take just a moment to acknowledge the likes of Vernon Johns, who preceded King as minister of Dexter Avenue Baptist Church and helped to lay the foundation of racial pride and civic awareness that defined much of what took place in Montgomery both during and following the bus boycott.  From the short biographical sketch by Ralph Luker:

In October [1948], Vernon Johns was called as the pastor of the city’s prestigious Dexter Avenue Baptist Church. There, he renewed his credentials as the publishing pastor of a leading African-American congregation with an essay, “Civilized Interiors,” in Herman Dreer’s American Literature by Negro Authors in 1950. But Johns was never a man to curry favor with the authorities, white or black. He antagonized local white powers with sermons such as “Segregation After Death,”\ “It’s Safe to Murder Negroes in Montgomery,” and “When the Rapist is White” and by summoning black passengers to join him in a protest of racial discrimination by walking off a bus in Montgomery.

In 1951, Vernon Johns’ father-in-law, William Johnson Trent, became the first African-American appointed to the Salisbury, North Carolina,
school board and Vernon Johns’s sixteen-year-old niece, Barbara Johns, led African American students at Farmville, Virginia’s R. R. Moton High School in a boycott to protest conditions in Prince Edward County’s schools. A month later, attorneys for the NAACP filed suit to
desegregate the county schools. The case would be decided only by the United States Supreme Court in 1954. The contrast was noteworthy. The Trents were cautious, conservative insiders, who hoped to manipulate a system; the Johns were aggressive outsiders, who believed the system needed a thorough renovation. In the summer of 1951, Barbara Johns left Prince Edward County to live with her aunt and uncle and finish her senior year of high school in Montgomery, Alabama. By then, however, Vernon Johns was already antagonizing his own congregation’s bourgeois sensibilities with sermons such as “Mud Is Basic” and by hawking produce at church functions. In September 1952, Altona Johns moved her children from Montgomery to take a position at Virginia State College in Petersburg. In May 1953, after four and a half stormy years at Dexter Avenue Baptist Church, its deacons accepted one of her husband’s several resignations.

This also an opportune moment to mention a new book by Glenda E. Gilmore, titled Defying Dixie: The Radical Roots of Civil Rights, 1919-1950.  I’ve already purchased it and hope to read it soon.  Check out Ray Arsenault’s review in the Washington Post and David Garrow’s review in the International Herald Tribune.

I tend to stay away from acknowledging Martin Luther King Day in class and in the last few years have stayed away from interrupting the flow of my survey classes to discuss Black History Month.  This is not to suggest that neither the holiday nor the continued acknowledgment of Carter G. Woodson’s vision of a black history day is not meaningful.  In fact, in many school districts it is absolutely essential, but in my classes African-American history is fully integrated into my curriculum.  I don’t even like calling it black or African-American history, rather it is American history and some of the most significant history at that.  This semester my students will be reading The Struggle for Black Equality, 1954-1992 by Harvard Sitkoff.  It’s a bit out of date, but it still provides a broad overview of race in the twentieth century and is incredibly thought provoking.
Finally, Oxford University Press is releasing its massive encyclopedia, The African American National Biography which is edited by Henry Louis Gates and Evelyn Brooks Higginbotham and contains 4,000 entries in 8 volumes. I was lucky enough to be able to contribute one entry on Robert A. Paul, who was born into slavery and later became a politician during the Readjuster years in Virginia.  Unfortunately, I had to work with limited source material, but I enjoyed it thoroughly and would write a full-length biography of this man if the material was available.  The publisher offered its contributors a 50% discount, which is very generous; unfortunately it still means that I would have to shell out close to $500 for a set.

At least two states are acknowledging the contributions of Robert E. Lee and Stonewall Jackson in addition to King today.  I have no doubt that Jesus is going to spend the day with King.