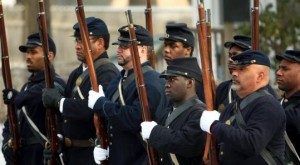 I am pleased to see that the American Civil War Center has been able to find a new director of education.  The staff is passionate about its mission and committed to bringing the museum to a national audience.  Howell has a diverse background that bridges both an interest in scholarly and public history, which is just what the museum needs.  Hopefully an announcement for the position of Executive Director is not too far in the future.  Here is the official announcement:

RICHMOND, Va. – The Board of Directors of The American Civil War Center at Historic Tredegar is pleased to announce the addition of Mark Howell as director of education.

Howell has worked in the museum field since graduating from the College of William and Mary in 1979 with a Bachelor of Arts in Colonial American Studies. He earned his Master of Arts in American Studies in 1994 from the same institution.  He worked for the Colonial Williamsburg Foundation for more than 20 years, serving in capacities as varied as bookbinder, staff trainer, dancer, artilleryman, and director of program planning.

Mark was most recently the president of Howell Consulting where he served the museum industry since 2002. His clients ranged from the National Trust for Historic Preservation’s newest acquisition, Villa Finale in San Antonio, to Andrew Jackson’s Hermitage in Nashville. Locally, he has served as a consultant for Maymont, Historic Polegreen Church Foundation, and Heritage and History of Hanover County, Inc.

Howell will be responsible for developing and implementing the Center’s school and public programming as well as educational outreach initiatives, including digital and web-based projects. “We are glad to have Mark join our staff and are eager to work with Mark to spread the Center’s mission and to launch the new Digital History Website,” said Adam Scher, the Center’s interim director and vice president of operations.  The website is designed for teachers and curriculum specialists and has been designed in partnership with the University of Virginia Center for Digital History.

Through the education department, the Center served more than 6,300 students during its inaugural year 2006-2007 including a summer institute for teachers sponsored by New York’s Gilder Lehrman Institute.  Howell is also an active participant in the museum and history fields, having served on the council of the Virginia Association of Museums and as chair of the National Awards Committee for the American Association for State and Local History. He and his wife, Katherine, reside in Williamsburg.

Previous post: Ida B. Wells, Lynching, and the Burning of Black Bodies