Sons of Confederate Veterans are not Educators 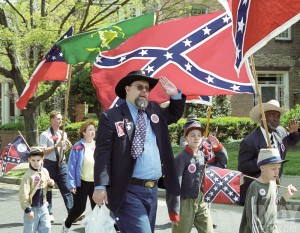 Claiming that you are defending the flag or honoring the memory of an ancestor does not confer the right to speak about history to middle school students.  Yes, let them shoot off their cannon and guns and talk a bit about camp life, but for God’s sake don’t allow them to babble on about the cause of secession and the role of slavery and race.  Here is what one member had to say to a group of students from a Louisville, Kentucky Middle School during a reenactment:

As educators we need to ensure that our students are interacting with individuals and organizations that are qualified and who demonstrate competency in their subject.  Lectures from a bunch of middle-age men upset with the state of today’s society is as far from such a standard as one can get.

Previous post: If You Fight it All Over Again They Will Come