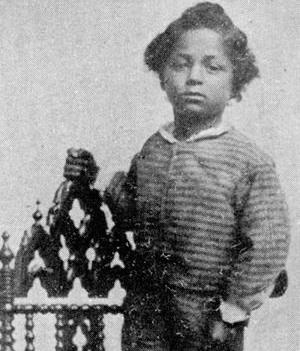 Richard Williams recently posted a short article by historian John Coski on the relationship between Jim Limber and the Davis family, which appeared in the winter issue of the Museum of the Confederacy’s newsletter.  While Coski does point to mutual bonds of affection between Jim Limber and the Davis family, he also suggests that there are many questions that cannot be answered.  This, of course, could change in the future.  While Coski does not address the debate surrounding the proposed statue of Limber and Davis, his analysis does bring the question of whether such a statue is justified based on the available evidence into sharp relief.  Is the Sons of Confederate Veterans justified in proposing a statue based on such limited evidence?  If so, why?  What precedent would this set in terms of the way we go about commemorating and remembering other moments in American history in our public spaces?  Finally, I hope Mr. Williams is not operating under the assumption that Coski’s essay ought to be interpreted as tacit support for this proposed statue.  If anything the essay highlights the wide gulf between what serious historians can legitimately conclude about this relationship and the message that a marble statue will no doubt communicate.  You will find Coski’s essay below.

“What Do We Really Know About Jim Limber?”

The ambrotype photograph of a mulatto boy came into the Museum collection with a label in the hand of Varina Davis: “James Henry Brooks adopted by Mrs. Jefferson Davis during the War and taken from her after our capture. A great pet in the family and known as Jim Limber.” Not only the caption, but the image itself testifies to an intimate relationship between “Jim Limber” and the family of President Jefferson Davis. The child apparently posed for the photograph at the same time as the Davises’ own children using the same chair prop used for the photo of Billy Davis (page 19).

Looking more closely and more critically at the photographs and the donation label suggest a more ambiguous interpretation. Jim Limber’s hand-me-down clothes contrast with the formal Scottish garb in which William Howell Davis was clothed. Which of Varina’s words most accurately described his status – “adopted” or “pet”?

Jim Limber has been the subject of several popular magazine articles, occasional internet postings, and even an illustrated children’s book, Jim Limber. How much do we really know about this young man beyond the photograph and its postwar label? Does the evidence support the identification of him as “Jim Limber Davis,” an adopted son of the Confederacy’s first family?

Varina Davis, in her 1890 memoir of her husband, explained how Jim Limber came to live with the Davis family. Her account is in a footnote for a passage recounting how her young sons hung out with a Richmond boy gang called the “Hill Cats”: “A little free negro boy whom we had rescued from one of his own color, who had beaten him terribly, lived from that time {early 1864} with us. Mr. Davis, notwithstanding his absorbing cares, went to the Mayor’s office and had his free papers registered to insure Jim against getting into the power of the oppressor again. Jim Limber, which he said was his name in his every-day clothes, who became Jeems Henry Brooks in his best suit on Sunday, was a fearless ally of the Hill cats.”

Significantly, the former Confederate first lady did not claim that the president “adopted” the child, but merely registered his free papers. The Free Negro register for Richmond did not survive the war, robbing historians of the most obvious source for corroborating Varina Davis’ account. Searches through surviving city records turn up nothing about President Davis registering free papers or becoming a guardian for a child ward of any description.

Nineteenth-century Virginia law did not provide for formal adoption of children; if the Davises “adopted” Jim Limber, it was an extralegal process that does not show up in the historical record.  Even without official documentation, wartime sources do corroborate Mrs. Davis’ postwar account of Jim Limber’s presence in the Confederate executive mansion. On February 16, 1864, a family friend, the celebrated diarist Mary Chestnut, recorded that she saw (in the 3rd-floor room where Varina’s mother lived for part of the war) “the little negro Mrs. Davis rescued yesterday from his brutal negro guardian. The child is an orphan. He was dressed up in Little Joe’s clothes and happy as a lord. He was very anxious to show me his wounds and bruises, but I fled.”

A year later, nine-year-old Margaret Davis wrote to her younger bother, Jeff, who was spending time with the army, relaying that “Jim Limber sends his love to you…” As the Davises fled southward from Richmond in April 1865, Varina included Jim limber in her reports to her husband about the family. On April 19, 1865: “The children are well and very happy—play all day—Billy & Jim fast friends as ever…” On April 28, 1865: “Billy and Jeff are very well—Limber is thriving but bad.”

Within two weeks, Federal troops caught up with the Davis family and their party of military aides, slaves, servants—and Jim Limber—near Irwinville, Georgia. When the captives reached the Atlantic coast on a river transport ship, the Davises and Jim Limber were separated forever. Another member of the Davis party, Virginia Clay, noted in her diary that Mrs. Davis’ “pet Negro” had been taken from her.

The former President recounted the event in an 1875 letter. Davis described Jim as “a little negro orphan who she [Mrs. Davis] had in pity rescued from the ill treatment of a negro woman in Richmond who claimed that the boy’s mother had left him to her.” Rather than give him over to a Federal officer they judged untrustworthy, the Davises placed him in the care of an old army friend, Gen. Rufus Saxto.  Varina elaborated on the incident in another footnote in her memoir: “[W]e learned that our old friend, General Saxton, was there [at the Hilton Head], and my husband thought we might ask the favor of him to look after our little protégé Jim’s education, in order that he might not fall under the degrading influence of Captain Hudson. A note was written to General Saxton and the poor little boy was given to the officers of the tugboat for the General, who kindly took charge of him. Believing that he was going on board to see something and return, he quietly went, but as soon as he found he was going to leave us he fought like a little tiger and was thus engaged the last we saw of him. I hope he has been successful in the world for he was a fine boy, notwithstanding all that had been done to mar his childhood. Some years ago we saw in a Massachusetts paper that he would bear to his grave the marks of the stripes inflicted upon him by us. We felt sure he had not said this, for the affection was mutual between us, and we had never punished him.”

Contrary to modern renditions of Jim’s biography, there is no evidence that the Davises subsequently searched widely for him. Indeed, Varina’s own account of their separation indicates that she understood it to be permanent.  Most modern accounts of Jim Limber end with this dramatic scene. An 1893 memoir, First Days Among the Contrabands (published while Mrs. Davis was still alive to read it), offers a few more details about the child’s life after the Davises.

Elizabeth Hyde Botume, a Boston woman who came south to teach the freedmen on the South Carolina sea islands, recalled him as “about seven years old, but small for his age; he was a very light mulatto, with brown curly hair, thick lips, and a defiant nose.”  Botume also recalled that Mrs. Davis sent Jim Limber to Gen. Saxton with a note, “written with pencil on the blank leaf of a book. I quote from memory. She said:–‘I send this boy to you, General Saxton, and beg you to take good care of him. His mother was a free colored woman in Richmond.  She died when he was an infant, leaving him to the care of a friend, who was cruel and neglectful of him. One day Mrs. Davis and her children went to the house and found the woman beating the little fellow, who was then only two years old [sic]. So she took him home with her, intending to find a good place for him. But he was so bright and playful, her own children were unwilling to give him up. Then she decided to keep him until he was old enough to learn a trade. ‘That was five [sic] years ago, and he has shared our fortunes and misfortunes until the present time. But we can do nothing more for him, I send him to you, General Saxton, as you were a friend of our earlier and better times. You will find him affectionate and tractable. I beg you to be kind to him.’ That was the gist of her note.”

Jim Limber joined the Sea Islands freedmen’s colony. “As he as the constant companion and playmate of Mrs. Davis’ children, he considered himself as one of them,” Botume wrote, “adopting their views and sharing their prejudices. President Davis was to him the one great man in the world. Mrs. Davis had given him the kindly care of a mother, and he had for her the loving devotion of a child.”

He apparently developed a similar bond with his new “new protectors,” the Saxtons. They soon found it necessary to transfer him to care of the teachers, who took him north for schooling.  “Finally,” Botume wrote, Jim “drifted” into the home of a northern woman, who “placed him where he was well-trained in all ways, having the advantage of school, as well as a good practical education, until he was old enough to support himself.”

Although flawed in some details, Botumes’s recollection seems to substantiate Varina Davis’ telling term, “protégé,” as the most accurate description of Jim Limber’s status. The Davises clearly assumed responsibility for him and there was obviously affection between him and his sponsors. It is less likely that he was “adopted” in any meaningful sense.  The evidence suggests that he was a member of the Davis family in the same way that slaves, servants, and other dependents were members of white families—with real mutual responsibility and affection.

The story of Jim Limber’s association with the Davis family provides a window onto the nature of paternalism in the 19th-century race relations. New evidence may turn up to provide answers to the many questions about the story that have so far eluded historians.

Next post: America is the Greatest Best Country God Has Ever Given Man on the Face of the Earth