Why the NPS at Gettysburg Is On the Right Track 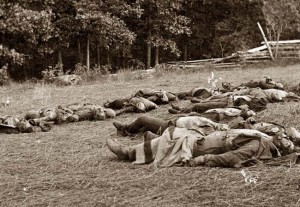 I appreciate all of the comments that have been sent in re: the new Visitor Center at Gettysburg.  The major point of disagreement seems to be over the proper scope of interpretation, whether it should be confined to the battlefield or whether it should place the battle within a broader historical context.  My view comes down to the importance of civic education and the need to show why these bloody battles matter beyond the movements of troops and the weapons they carried.  As I’ve stated over and over these men did not simply fall from the sky in July 1863.  They were there for a reason and their actions shaped the course of the rest of American history.  Understanding the battle’s centrality to that broader story is the NPS’s primary mission and one that I believe it fulfills brilliantly.  With that in mind I would like you to consider the perspective of one individual.  This short essay by Allen B. Ballard appeared in the Op-Ed section of the New York Times back in 1999 and is titled, “The Demons of Gettysburg”.  Ballard teaches history at SUNY -Albany.

It was Memorial Day weekend a year ago, and since I was deep in the writing of a novel about a black Civil War cavalryman, I decided to stop at Gettysburg on my way home from a college reunion. I had passed through the town several times before but had avoided the battlefield, put off not only by the commercial of the town, but also by a feeling of emotional detachment from the battle, since no African-American soldiers had taken part in it.

Indeed, a company of black volunteers from Philadelphia who took the train to Harrisburg to fight the Southern invaders were turned back because of their color. But now I had read several tomes about Gettysburg and knew the major actors, the landscape and the stakes, and it was time to view the battle scene for myself.

Early Sunday afternoon I went to the visitors’ center and watched the battle being played out on a huge floor map where lights depict the shifting positions of the Union and Confederate forces. I was the only black in the entire audience. A little later, I asked a black ticket taker at the huge sightseeing tower overlooking the battlefield how many African-Americans were among the passengers who went up in the elevator. “Very few,” she said. “Ten or 15 a day.”

At the top of the tower, buffeted by a heavy wind, I surveyed the battlefield through my binoculars. There, to my right, was the site of the farm that had belonged to a black man who fled with the coming of the confederates, knowing that they were seizing free black people, shackling them together and selling them into slavery down South. Far in the distance was Little Round Top, the extreme left of the Union lines, where Col. Joshua Chamberlain made his now famous stand with the sturdy men of Maine. I decided to walk as much of the battlefield as possible.,

I began with Cemetery Ridge, the site of Pickett’s Charge, where on the afternoon of July 3, 1863, some 13,000 Southerners, flags flying, drums rolling, trumpets blowing, had marched up a softly sloping hill toward the waiting Yankee cannon. Half of them never made it back to their lines. The spot of their furthest advance is near a monument commemorating Brig. Gen. Lewis Armistead, who had placed a hat on the end of his sword — so that his Virginia lads could look up, see it and be emboldened — and shouted, “Come on, boys, give them the cold steel!” He was mortally wounded in the charge.

Had Armistead’s admittedly brave men prevailed and the Union lines been broken, slavery might have been preserved in the South for generations. I gazed at his stone memorial and softly cursed his slavery-spreading soul. And for good measure, that of D, Wyatt Aiken, a South Carolina colonel who held my blacksmith ancestor in bondage and commanded one of the South Carolina regiments that had fought half a mile or so way from this spot on the previous day. Then I asked the good Lord to forgive me.

I passed monument after monument to troops from Wisconsin, Michigan, Ohio, Illinois and Pennsylvania. At each one, I glanced toward those fields and woods from which the Confederate regiments had come marching and blessed the Yankee mechanics, farm boys and clerks and the German, Polish and Irish immigrants who kept firing from their Springfield’s into the Rebel ranks. Few of the Union men had nay particular love for black people, but most recognized a curse on the land and their own futures when they saw one.

Enveloped now in the aura that hovers over this battlefield, I finally stood on the crest of Little Round Top, just about where Col. Chamberlain’s men had been before they charged down on the Confederates with fixed bayonets and routed them, saving the day and probably the battle for the North. Below me were the huge boulders from behind which the Confederates had advanced, their gray and butternut uniforms emerging from the gray of the rocks.

The sun was getting low. I took one last look around. Two rebel soldiers sat on a rock behind me, knees curled up between their arms. They were only re-enactorsl. But how dared they! They were telling the tourists that they were from the “Valley,” Stonewall Jackson’s stomping grounds down on the Shenandoah. We sized each other up, the Rebs and I.

Their look wasn’t hostile, but buddylike — hey, we’re all up here on the Round Top together. I wanted to scream at them. Instead, I turned away and began the long march back along Cemetery Ridge toward the statue of Gen. George Meade, the commanding officer of the Union forces. I took a photo of him and then stood looking out over the field.

Abe Lincoln, the man of sorrow and reconciliation, had stood nearby eulogizing the Union dead and charging the living to rededicate themselves to the eternal principles of justice and equality What would that great soul think of us now? And just how came it to be that all these years later and in the sixth decade of my life, I — born in nearby Philadelphia, the descendant of leaders of the Underground Railroad, runaway Maryland slaves and a black veteran of Valley Forge — still felt like an uninvited guest at this spot? Hadn’t the Park Service set up a special exhibit in the visitors’ center on the role of African-American troops in the Civil War, and wasn’t everyone here overflowing with courtesy toward me?

There was a red tinge in the rapidly darkening sky. I was the last person on the battlefield — except, faintly, I heard an unmistakable tune. Someone was whistling “Dixie” right there in the middle of the Union lines. I saw him, a thin man in a short-sleeved shirt, about 30, coming toward me with a woman on his arm. I stood at full height looking over the battlefield, arms folded. Would he have the nerve to go by me whistling that song? And what would I do if he did?

He was about 25 yards away from me, still whistling, but more softly, and then he fell silent. They must be directly behind me. I let mybreath out but didn’t budge. A minute, two minutes, and then he started up again: “Away away!”

I turned and headed home, determined that on this day and in this place, I would not let the sun go down on my wrath.