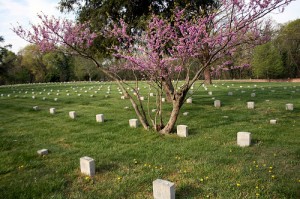 It’s a strange feeling to have to write a commemoration talk when the very thing that deserves to be remembered and reinforced has almost entirely been forgotten. Even I failed to acknowledge that December 6 was the anniversary of the passage of the 13th Amendment, which ended slavery forever. Few Americans would have conceived of this as a possibility in 1861. The battle of Fredericksburg, which was fought on the eve of the Emancipation Proclamation, is part of this story of a “new birth of freedom” and deserves to be acknowledged in a nation that professes to believe in freedom and equality for all.

I believe the commemoration ceremony this coming Sunday is being held next to the Kirkland Statue. It’s a fitting place to hold the ceremony. We all know the story of Sergeant Kirkland of the 2nd South Carolina who gave aid and comfort to wounded Union soldiers at the base of Marye’s Heights. That said, I would much rather be in sight of the soldier’s graves. They force us to ask the difficult questions of what the war means to us as well as what is worth remembering and commemorating. Kirkland’s story is one that all Americans can identify with, and rightly so, but when are we as a nation going to get to a point when emancipation and the end of slavery can be acknowledged as a fitting price for so much death and suffering?