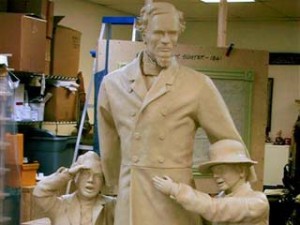 The Sons of Confederate Veterans is still trying to find a home for their statue of Jefferson Davis and Jim Limber.  The statue, which cost $100,000, was originally planned for the grounds at Tredegar in Richmond next to the statue of Lincoln and his son Tad.  The American Civil War Museum accepted the statue, but made no promises as to whether it would be displayed and how.  Apparently, the SCV doesn’t know the first thing about how museums operate.  Now they are offering the statue to the state of Mississippi.  Good luck boys, but in this political climate my guess is that you don’t have a chance.  My offer still stands to use it in my classroom as an interpretive piece to help my students better understand the continued influence of the Lost Cause.  What do you say? We will take very good care of it.

Between the statue, their big ass Confederate flags flying over Southern highways, and their endorsement of a NASCAR driver, the SCV has demonstrated their commitment to wasting money and their inability to take Southern heritage seriously.