I think he needs it.  Here are just a few of my favorite images of Robert E. Lee that I would be proud to have hanging in my office. 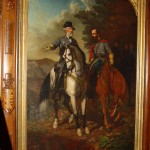 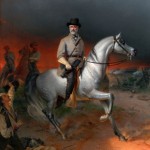 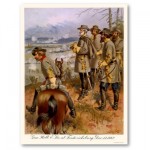 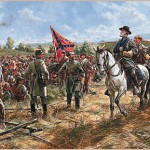 [left to right: “The Last Meeting of Lee and Jackson” by Everett B.D. Julio, “General Robert E. Lee at the Battle of Chancellorsville, Va” by L.M.D. Guillaume, “General Robert E. Lee at Fredericksburg, December 13, 1862” by Henry A. Ogden, and “Until Sundown” by Don Troiani (this print hangs in my office) – I was unable to find one of my favorites of Lee  by Edward C. Bruce, but you can find a copy of it in Gallagher’s recent book on movies and art, p. 160.]

So, among the other things we disagree about, throw in art.  Good work, Richard.  Do you feel better now?  By the way, what are your favorite images of Lee?  And how about you, dear reader?

Note: I just realized that my preferred images of Lee are military and in the heat of battle. Perhaps, this comes back to the factt that I see Lee’s importance to the Civil War as strictly military. Yes, I am interested in his broader narrative, but in the end his relevance always reduces to his record and performance on the field. I am willing to wager that there are more artistic renditions of Lee outside of his role as general. Has this ever happened with any other general in American history? If not, why?

Next post: CFP: Historical Tourism in the American South

Previous post: Cotton: The Fabric of Our Lives – Just Not the Lives of Slaves