I‘ve got 55 exams to grade as well as end-of-the-trimester comments to write over the next few days.  But for now I am enjoying the final projects from my students who spent this past trimester studying Civil War Memory.  This was one of the most rewarding experiences for me to date.  I had a wonderful group of motivated and curious students who thoroughly embraced the subject and who pushed me every step of the way.  For their final projects I gave them a wide range of options, but encouraged them to come up with their own ideas.  I wanted them to reflect a bit more on some aspect of the course or contribute in some way to the memory of the war.  In the end, their projects covered a broad spectrum.  One student analyzed the song, “The Night They Drove Old Dixie Down” by The Band, while another student did a thorough analysis of the Dixie Outfitters website.  Two groups of students made documentaries based on our trip to Richmond while another group did a survey of the school community on issues related to the Civil War and memory.  Two students chose to reflect on how their own memory of the war has evolved over the course of the trimester.  They were quite moving and attest to the continued influence of the Civil War on even the youngest generation.  A couple of students chose to write their own commemorative speeches on some aspect of the war; they were accompanied by slides to give the audience a sense of time and place.  The photos below constitute just a small sample of what was done. 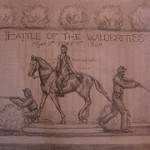 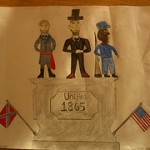 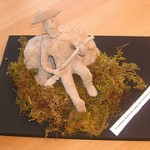 One student decided to do a couple of sculptures.  The one pictured above is titled, “Confederate Bushwhacker Hides from Pro-Union Jayhawker.”  Two students sketched their own idea for a Civil War monument accompanied by an essay which outlines its theme and purpose.  The first one is titled, “Battle of the Wilderness, May 5th -7th, 1864.”  Here is a brief excerpt from this student’s essay:

The monument itself depicts Grant atop his horse with a soldier to his right and another flanking his left side.  The horse is slightly prancing, made nervous by the commotion, fire, and lack of visibility.  Grant sits erect, holding his hat behind him to urge his men to keep moving forward.  There is a bush both directly in front and behind the monument, again giving the sense that these soldiers were fighting in a thicket and  had to maneuver around such obstacles.  Their muskets are raised, ready to fire, and their bayonets are in place and ready for the hand-to-hand combat and bloody fighting that they faced.  The monument is dedicated to the remembrance of Grant and his army, especially the soldiers that sacrificed themselves to make the necessary push forward against Lee’s army, leading the Union to victory.

The next sketch is titled, “Unification, After the War” and features Lincoln, Lee, and a soldier in the 54th Massachusetts:

In the center, President Abraham Lincoln stands strong and composed.  He is dressed in his dignified black suit along with his unmistakably famous top hat.  I included Lincoln in my monument because he is the reason why the United States survived and was unified after the Civil War.  Before the war, Lincoln stated that, “A house divided against itself cannot stand.”  Therefore, he stands in the middle of General Robert E. Lee and a soldier in the 54th Massachusetts Regiment to emphasize just how right he was.  General is placed to Lincoln’s right on my monument.  He was the heart of the Confederate Army and fought bravely for the South.  His placement besides Lincoln represents the unification of both sides after the war in 1865.  To the left of Lincoln I placed a brave soldier from the 54th Massachusetts commanded by Colonel Robert G. Shaw.  This soldier symbolizes the start of change in America after the war.  Even though laws were not equal for black Americans after the war, victory for the North was the beginning of the transformation of the United States….This monument symbolizes the rebuilding of the United States of America after the war.  Each man represented on this monument had a part in this war; therefore they are equally commemorated on it.

I’ve got some ideas about how I can improve the class if I choose to offer it next year.  For one, I would like to make it much more hands on for students and allow them to work on more detailed projects.  My guess is that this is the first high school elective ever offered on the Civil War and memory.  Now that’s pretty cool.