The Power of Hollywood 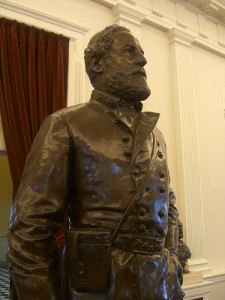 The highlight of my trip to Richmond this past weekend was the tour of Virginia’ State Capitol.  Although I’ve walked by it many times, for one reason or another I never had the time to actually walk through it.  Michaela and I decided to tag along with one of their tour guides.  We had a nice elderly woman guide us.  I have to admit that I anticipated the standard tour that barely scratches the surface of the place, but I was pleasantly surprised within a few minutes of the tour.

Our guide did an excellent job of interpreting the Jean-Antoine Houdon statue of George Washington which sits at the very center of the Rotunda, but it was her knowledge of Rudulph Evans’s famous Robert E. Lee statue in the Old Hall of the House of Delegates that really impressed me. The statue is located at the spot where Lee accepted command of Virginia forces on April 23, 1861.  I inquired into the choice of uniform that Evans utilized.  In an attempt to impress our guide I noted that Lee would not have been wearing his Confederate uniform at this time since he was only accepting command of Virginia state forces.  First, our guide informed me that the likeness was based on a wartime photograph of Matthew Brady, which makes sense after looking at it, but then she asked if I knew what he was, in fact, wearing on that day.  With little delay and an apparent knack for putting my own foot in my mouth I said that he would have been wearing his blue U.S. army uniform.  How did I know this?  I clearly remember the scene in Ron Maxwell’s Gods and Generals.  Lee, played by Robert Duvall, is wearing a uniform.  Well, it turns out that Lee wasn’t wearing a uniform at all.  He was wearing civilian clothing.

Innocent mistake, no doubt, but it does reflect the influence of popular culture on our understanding of the past.  What’s funny is that I’ve criticized this movie over and over and I still went to it as a reliable source on this issue.  I should know by now that the only reason to reference it is in the context of Civil War memory/mythology and bad film making.  Here is the scene:

[Have you ever wanted to embed a YouTube video at some point in the middle?  Click here.]
9 comments… add one

Next post: “The Robert E. Lee Memorial: A Conflict of Interpretation”