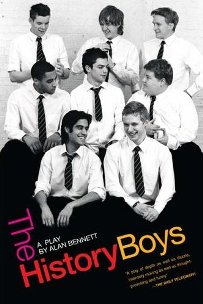 Last night I made my acting debut in the Tony Award winning play, “The History Boys.”  It’s the story of a small group of pupils in a British school who are being groomed for admission to Oxford and Cambridge.  The story follows this small group as they navigate through two very different teaching philosophies as well as their own sexuality.  Those of you who have seen the movie are aware of the mature content and may even be surprised that a high school has allowed it to be performed at all.  I am proud to say that I work in a school that strives to address controversial material in a mature and educational manner.  Needless to say, the weeks rehearsing have been challenging given the dialog between student and teacher, though in the end I think we’ve all learned something from one another about this thing called education.

Two scenes in particular stand out to me given my interest in historical memory.  The first takes place in a full classroom and the second between a teacher and student:

Scripps: But it’s all true.

Irwin: What has that got to do with it?  What has that got to do with anything?  Let’s go back to 1914 and I’ll put you a different case.  Try this for size.  Germany does not want war and if there is an arms race it is Britain who is leading it.  Though there’s no reason why we should want war.  Nothing in it for us.  Better stand back and let Germany and Russia fight it out while we take the imperial pickings.  These are facts.  Why do we not care to acknowledge them?  The cattle, the body count.  We still don’t like to admit the war was even partly our fault because so many of our people died.  A photograph on every mantelpiece.  And all this mourning has veiled the truth.  It’s not so much lest we forget, as lest we remember.  Because you should realise that so far as the Cenotaph and the Last Post and all that stuff is concerned, there’s no better way of forgetting something that by commemorating it.

Hector: Mmm – the important thing is that he has a name.  Say Hardy is writing about the Zulu Wars or later the Boer War possibly, these were the first campaigns when soldiers…or common soldiers…were commemorated, the names of the dead recorded and inscribed on war memorials.  Before this, soldiers…private soldiers anyway, were all unknown soldiers, and so far from being revered there was a firm in the nineteenth century, in Yorkshire of course, which swept up their bones from the battlefield of Europe in order to grind them into fertiliser.  So, thrown into a common grave though he may be, he is still Hodge the drummer boy.  Lost boy though he is on the other side of the world, he still has a name.