Confederate Memorial Day As a “Line in the Sand” 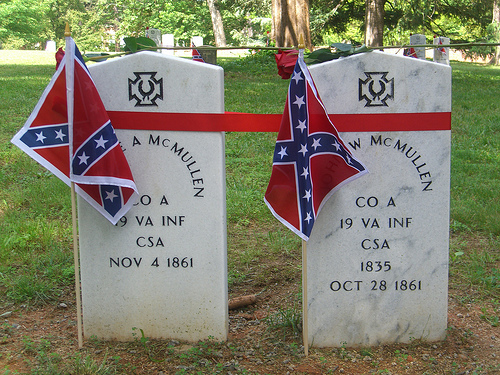 I had a few hours to kill today so I decided to attend our annual UDC/SCV Memorial Day commemoration here in Charlottesville, Virginia.  The ceremony is held at the Confederate cemetery at the University of Virginia.  It’s a wonderful little spot that includes your standard soldier monument as well as the graves of 1,097 Confederate soldiers from all over the Confederate South.  I decided to stand in the rear to take it all in.  These ceremonies are pretty standard.  They typically include the Pledge of Allegiance, a salute to the Confederate flag as well as old favorites such as “Dixie’s Land” and “Carry Me Back to Old Virginny.”  Who can resist the lovely Lost Cause imagery in “Carry Me Back”, especially when the lyrics were composed by a black man:

The prayers included typical references to the “Spirit of ’76”, “Died for states rights”, “overwhelming numbers”, and the SCV’s rallying charge of “unequivocal confidence in the righteousness of the cause.”  One reference, however, got me thinking.  One of the speakers remarked that the graves, along with the monument, reflect a “line in the sand between modern day evils” and a “strong moral code” that animated the men buried, and, I assume white Southern society before modernity set in.  If you look at the profile of the audience the reference makes perfect sense.  There were reenactors with the 19th Virginia in attendance as well as members of the UDC in period costume.  More to the point, it is safe to say that the average age of the audience (approximately 100) was somewhere between 55-60.

There are two problems with this view.  First, it’s self destructive.  To argue that modern society is void of morals or individuals who care about morality/ethics is a sure fire way of alienating a very large constituency.  Unfortunately, today I didn’t see people who wer defending a way of life.  I saw people who fear modernity, which is fine, but it also means that the sound system you’ve been using for the past 50 years may not work when needed.  Let’s face it, given the profile of the SCV/UDC it is not a stretch to suggest that their days are numbered.  Seriously, how many of these chapters will be left in 20 years?  The bigger problem is that their view of the past is much too simplistic and anachronistic.  This notion that white Southerners resisted many aspects of modernity simply does not hold up under close scrutiny.  Many Virginians eagerly embraced industry and other forms of technology as a way to improve their lives and reclaim their rightful position as the leader of the nation.  Even the wealthiest planters hoped to encourage farmers to adopt modern soil practices and, according to John Majewski, vigorously pushed the Virginia state government to become much more active in encouraging the subsidizing of railroads and agricultural societies.  My point is that these were not people who were trying to turn back the hands of time despite what is posted at the entrance to the Wilkes family plantation.

I enjoyed the hour long ceremony.  I got to catch up with my friend and fellow historian Rick Britton who spoke eloquently about the 19th Virginia.  And I was also pleased to hear that our local UDC chapter is working to raise money to place grave markers for all the soldiers buried in the cemetery.  It’s a worthy endeavor and they’ve already managed to place an additional 60 markers since the program began and include the two markers in the above image.

Previous post: Trouble on the Horizon for LSU Press?