Is This What James Longstreet Meant? 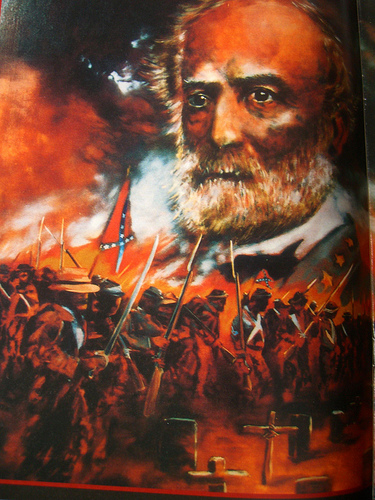 A historian friend of mine recently decided that he needs to add another 22 ft of shelf space to his library.  To achieve this he decided to unload some back issues of the old Civil War magazine and asked if I was interested.  Of course, I jumped at the offer and within a short period of time I found myself with issues going back to the mid-1980s.  I don’t remember the magazine when it was known as Civil War Quarterly, but I am quite impressed with the quality of the writing.  One issue in particular stood out, which featured an article on Lee at Gettysburg by Kent Masterson Brown and a painting of Lee that I have never seen before [Jan-Feb 1993].  The painting is titled, “Forever Marching” and was done by Ed Murin.  I tried to find some information about Murin, but came up short.  Since I couldn’t find an image Online I took one with my camera which you can see here.

I’ve never seen anything quite like this image of Lee.  I would place it on the extreme opposite end of those silly prints of Lee reading to a child or praying with Jackson. [How about the jigsaw puzzle version?]  As far as I can tell the closest image to Murin’s is L.M.D. Guillaume’s “Gen. Robert E. Lee at the Battle of Chancellorsville.”  Lee appears bloodthirsty as he sends his men into battle and over what appears to be the graves of their comrades.  What I find so striking is Lee’s eyes, which seem utterly lifeless.

Is this what James Longstreet meant when he noted in his memoir that at Gettysburg “Lee’s blood was up”?  And is this a side of Lee that we would rather not be reminded of?

Previous post: Confederate Memorial Day As a “Line in the Sand”