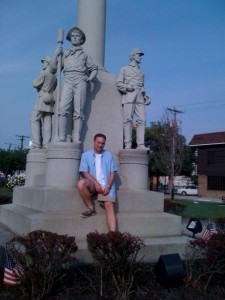 I just returned from a brief trip home to see the folks in Jersey.  My wife and I spent one day walking the beautiful beaches in Ventnor and Margate before meeting up with the family for Chinese food.  With a few hours to kill and a hearty appetite we decided to go for a little appetizer at the world famous White House Subs in Atlantic City – just one of my many old stomping grounds.  Hey, I can get Chinese food anywhere, but where I am I going to find a decent sub outside of Jersey?  Forget about it.

A few blocks past the large parking lot that once included my high school on Albany Avenue, I noticed what appeared to be a typical Civil War monument that you will find in many parks in the northeast.  A quick stop revealed that it was indeed a Civil War monument and I am embarrassed to admit that I never noticed it before.  All I know about it is that the monument was dedicated in 1916.  Given that the city did not exist in the 1860s it would be interesting to know why the community decided to honor the veterans.  Perhaps enough of them moved to the city for health reasons that it was warranted.

I have no doubt that as a high school delinquent I smoked a few cigarettes while sitting at the monument’s base before trying to sneak into the closest casino.