A Civil War Museum of Facts and Not Beliefs 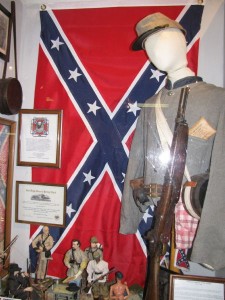 Are you tired of the continued attack on American culture by liberal academic and public historians who present history in a way that conflicts with your cherished notions of the Civil War and Southern history?  Well, head on down to Jacksonville, Florida to the Museum of Southern History.  Although it claims to be a museum of Southern history, from the looks of the photographs there is nothing on display beyond the Civil War years.  What you will find, however, are exhibits that just present the facts with no accompanying interpretation.  Incoming board president, Ben Willingham, put it this way: “We’ve been fed political correctness[.]  We’ve dumbed down society. It’s all in the Congressional Record. The facts are there. It’s not about beliefs.”  Although it is not attributed to Willingham, it looks like he also suggested:  “The men said the Civil War was about money, not slavery, and that African-Americans owned slaves. The first slave owner was a black man in Virginia.”

Well, I am pleased to see that some of the most important questions within the fields of Civil War and Southern history have been put to rest.  Given that the Sons of Confederate Veterans hold their meetings in the museum, I have no doubt that other important questions will also be answered.

By the way, is that a little black Confederate doll in the display case next to what appears to be a naked Confederate soldier?  What’s that about?