Please Stop Using Our Civil War To Satisfy Your Own Fantasies 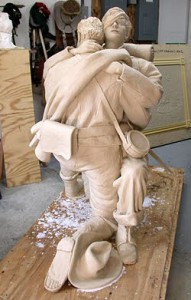 Gary Casteel’s previous projects include a sculpture of Jefferson Davis holding hands with his biological son and “adopted” black son, Jim Limber.  That project satisfied the fantasies of the Sons of Confederate Veterans, which as far as I know still cannot find a home for it.  From the fantasy of southern paternalism we move to one of the most popular narratives of our Civil War memory: Brother against Brother.  Not surprisingly, the inspiration for this latest piece stems from a story handed down through the Casteel family:

Casteel says that his own family had two ancestors – brothers – who actually fired at each other from opposing armies during the Battle of Gettysburg, according to family history that has been handed down through generations.  It was not until about a year after the War that the brother who fought as a Confederate eventually showed back up at the other’s farm.  It had apparently taken a year for him to come to grips with the fact that the South had lost. But the delay in returning apparently was not long enough to heal the emotional wounds; the two brothers began to fight about the War’s outcome and eventually parted ways forever.  The Union soldier in “Brothers” is wounded and wearing a head bandage, and is clutching his brother. The Confederate soldier is shown in a reciprocal embrace, but his one fist remains clenched. Casteel says that he portrays the Confederate as the one who finds it hard to let go of the fact that his brother is a Yankee. “Hard to accept the fact that his world is now changing.”

I also heard stories from my parents and grandparents of relatives fighting one another during the Civil War, even though the family didn’t arrive at these shores until the early twentieth century.  At least one Levin had his home burned down by Sherman.

Why can’t we move beyond this ridiculous little narrative thread that tells us nothing about the horrors and consequences of war?  Let’s stop playing Civil War and get serious; after all, this is supposed to be art.  It looks like something out of a Civil War soap opera or Mort Kunstler painting.  Does anyone know if this statue is going to be placed on NPS-owned land?

Next post: Rape and the Threat of Sexual Violence in the Civil War South + Gary Casteel

Previous post: “History Through the Veil Again”: A Response to Ta-Nehisi Coates