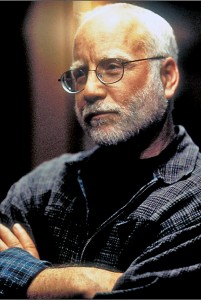 A few months ago I commented on actor Richard Drefyuss’s new crusade of working to introduce civics back into the high school curriculum.  I did not know at that time that he would be speaking at my school.  Well, today was the big day and I thought I might share a few observations.  Let me begin by applauding Dreyfuss for his sincere interest in this issue.  I support anyone who can help to shed light on those areas that need improvement in the education of young Americans.  And unlike some who criticize Hollywood types for their social activism I welcome it.  If it takes a high profile name to draw attention to some issue than so be it.  Of course, it is incumbent on that individual to demonstrate competence in the area in question.  Unfortunately, Dreyfuss falls far short of this mark.

Our school organized his visit around a panel discussion that included six students, all of whom had prepared questions for Dreyfuss.  From the beginning Dreyfuss had difficulty staying on message and he alienated much of his audience when he asked for a volunteer to cite the Bill of Rights.  That seemed to be sufficient reason to pound home his broader theme which is that the United States is doomed.  There was actually very little talk of civics; rather he touched on what he sees as a lack of civil discourse.  Well, who would disagree with that?  However, if you are going to offer such a critique you must be the one to set the example.  Again, he fell short.  Student questions were not addressed in any substantive manner.  In fact, our students should be praised for the way they managed to steer Dreyfuss back to the question at hand or to another issue.

More disturbing was Dreyfuss’s mangling of basic historical facts.  He suggested that during the Jim Crow Era an average of 90 African Americans were lynched each month.  At one point he even described a WWII Congressional of Medal Honor winner as a “suicide bomber.”  [I believe his name was Kelley and he supposedly flew his plane into a Japanese warship at the beginning of WWII.  While I do not know the details of the case I think it is safe to assume that he was not a suicide bomber.]

As I stated in that earlier post, I have no doubt that Dreyfuss is passionate about this issue, but that is far from enough.  You have to have a plan to bring your audience to the place desired.  In short, you need to come equipped with an argument.  Vague thoughts about a lack of civility and a dire outlook for the future of this nation is simply insufficient.  In fact, at one point Dreyfuss wondered why he hasn’t been more successful in convincing his audiences of the desperate need for a renewed look at civics.  I now understand why.

Some suggestions for Dreyfuss:

1. Know your audience.  Most high school kids have no clue who you are.  This is important since the only reason your are being invited to schools is because of your name and career.  However, once you are on stage you need to reach out to the younger generation in a way that reflects that you understand their world.  For example, don’t simply dismiss the Internet with the back of your hand, engage them in how it can be a tool for positive dialog as well as the worst kind of misinformation.  As I always say, SHOW, DON’T TELL.

2. Students do not respond well to fear.  Instead of trying to motivate with scare tactics try presenting a picture of the kind of society that you envision.  First, you need to demonstrate it, but perhaps you are not the answer.  Consider some other type of presentation that may be able to more effectively convey the importance that you attach to civics education.  In short, the best way to drive home your message is to teach civics.  There was very little teaching done today.

3. Your website needs some serious work.  Your website is your voice since most of the nation will not get to see you in person.  Offer resources for teachers as well as a forum for individuals to share their ideas.  The possibilities are endless.

4. Finally, a little humility wouldn’t hurt.  To be honest, you haven’t provided any real solutions nor have you paid your dues.  What you’ve done is simply highlighted a problem and anyone can do that.  Keep in mind that when you enter a school you are interacting with people who not only know this, but are working day to day to combat it.  And many teachers around the country are doing this with very few resources and in difficult conditions.