Edward Sebesta is Back and Without Focus 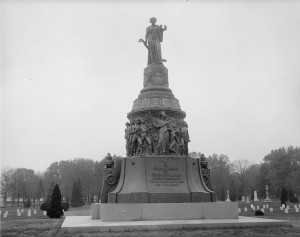 As he promised in January Ed Sebesta has petitioned President Obama to discontinue the practice of sending a wreath to the Confederate statue at Arlington National Cemetery on Memorial Day.  Actually, this petition goes much further than last year’s in requesting that the federal government “revoke the Sons of Confederate Veterans participation as a recognized charity in the Combined Federal Campaign, deny the SCV permission to host events for the United States Army, and prevent the SCV’s future involvement Junior Reserve Officer Training Corps (JROTC) programs in America’s high schools.”  In doing so Sebesta has moved away from focusing the nation’s attention on a specific public site in favor of a broader look at the neo-Confederate movement.  Unfortunately, any focus on the monument that Sebesta hoped to maintain is lost and I suspect that most people will not pay much attention to the SCV’s political activities and involvement in JROTC.  Before commenting further, I want to share what I wrote last year:

First, let me say that there is much in this new petition that I agree with.  The SCV promotes a Lost Cause inspired narrative of the Civil War that at times borders on racist.  You can indeed see this on the many chapter websites as well as their bookstore on the national site.  As far as I am concerned the fundamental problem for Sebesta is that President Obama made the right decision last year.  Rather than fuel the debate, which only worked to move interested parties further away from one another, the president sent an additional wreath to the African American Soldiers Monument in Washington, D.C.

This brings me to what Sebesta should have done.  Rather than steer the discussion down a road that very few will follow, Sebesta should have encouraged the president to continue the practice of sending the additional wreath.  Such a move would have been much more helpful in furthering Sebesta’s supposedly broader goal, which is to encourage a national discussion about race.  Last year’s petition did very little to further such a dialog and the fallout from last month’s Confederate History Month proclamation should be sufficient to demonstrate the futility of such a hope for this year.

The other problem is that Sebesta’s petition is signed mainly by academics, among them David Blight, Edward Blum, Robert Cook, Leon Litwack, and Chandra Manning.  I have nothing but the highest respect for these individuals, but outside of a select community why would anyone care that these individuals are on board?  After all, you can watch History’s latest documentary and see Daniel Walker Howe offering commentary next to Rudy Giuliani and Soledad O’Brien.  I’m sorry to say that academics carry very little weight in these matters.  If the petition had continued to focus on the monument I can see why a list of historians and other professionals would be desirable, but as I already pointed out, this has little to do with history.  More to the point, such a select group is only going to alienate certain constituencies who are already suspicious about academics.  On a related note, I would love to know what happened to James Loewen, who co-authored last year’s petition.

I do believe that Sebesta’s heart is in the right place, but it is difficult to see how this petition will bring about anything positive.

Next post: Where Should the New Chancellorsville Vistor Center Be Located?