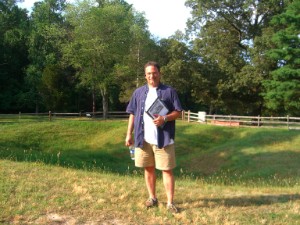 I want to thank Mark Snell and Denise Messinger of the George Tyler Moore Center for the Study of the Civil War and Will Greene and the rest of the staff at Pamplin Park for putting on a wonderful conference on the Petersburg Campaign.  It was nice to see so many familiar faces and I especially enjoyed making new friends.  It was indeed a busy three days and we spent a great deal of time in the sweltering heat, but it was well worth it.  I thoroughly enjoyed meeting and listening to fellow speakers, Chris Stowe and Earl Hess.  It was truly an honor to be on the same line up with Chris and Earl.  I was quite pleased with the response to my paper, which analyzed the Confederate response to the presence of U.S.C.T.’s at the Crater.  Speaking of that subject, I just reviewed the page proofs for the essay which will appear in the October issue of Civil War Times.  Dana Shoaf and company did a fabulous job of preparing the essay for publication and I look forward to hearing what people think.

In addition to the presentations we toured extensively around Petersburg.  For me it was an opportunity to familiarize myself with a campaign that I’ve had a great deal of difficulty understanding.  I think it’s safe to say that no one knows more about the city of Petersburg and the campaign than Will Greene.  He took us to City Point, the Crater, Weldon Railroad, Hatcher’s Run, White Oak Road, Five Forks, as well as the breakout battlefield at Pamplin Park.  There is something exciting about watching someone like Will, with such extensive knowledge, develop a narrative that makes sense of very complicated troop movements and then places those movements within a broader context for a public audience.  Not only is Will’s knowledge both broad and deep, he outlasted all of us by the end of what was an incredibly hot Saturday.

I encourage all of you to visit Pamplin Park if you happen to find yourself in the area.  The exhibits are well done and the grounds include some of the best preserved earthworks that you will see in the area.  I also highly recommend their film, “War So Terrible.” I have some things that I want to say about this film, so I am going to wait until later this week.  Finally, those of you looking for a summer Civil War seminar should seriously consider joining Mark Snell and the rest of the gang.  It’s a wonderful group of people, who enjoy one another’s company and who are well read in the history of the Civil War.  It looks like next year the conference will move to West Virginia to focus on the earliest battles while in 2012 the seminar will head southeast once again to focus on the Peninsula Campaign.  Check out the center’s website and get yourself on their mailing list.  You won’t be disappointed.

[Photo of me at the Crater]
0 comments… add one