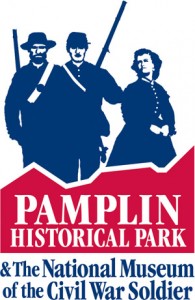 One of the highlights for me during last week’s Petersburg conference was the opportunity to view Pamplin Park’s feature film, “War So Terrible: A Civil War Combat Film.”  Will Greene describes its inception as a response to visitors who reflected on their experience in the park as somehow enjoyable or entertaining.  Greene and the rest of the staff did not want visitors, especially students, finishing their tour with a glorified view of war.  Rather, they wanted to convey the horrors of battle and the changes that soldiers underwent over the course of the war and beyond.  [This is something that I’ve discussed on this blog on a number of occasions.  See here and here.]

There are two versions of the film, the full length running 48 minutes as well as a less graphic version that runs 23 minutes.  The film is framed around a veterans reunion that takes place somewhere in the South.  During the ceremony both Benjamin Franklin Meyers of the Union and Andrew Jackson Stewart of the Confederacy reflect on their experiences during the war from their first battle to the trench warfare of 1864.  The film delves into questions of why men fought and persevered in the ranks without reducing the war to any one explanation.  There are no transcendent figures and no references to Lincoln, Davis, Lee, Grant or anyone to detract from the focus of the film.  Viewers empathize with both individuals and suffer through some very difficult battle footage, which is emotionally draining.  The film succeeds brilliantly in conveying the emotion of battle.  Finally, the reunion scenes steer clear of the mistaken notion that Lee’s surrender at Appomattox or even later events involving Union and Confederate veterans reflected the healing of old wounds and bitterness.  I don’t want to give too much away about this movie.

At the conclusion of the movie our group remained silent for a few moments before discussing it with Greene and I don’t mind admitting that I had a tear in my eye.  I made it a point to purchase a copy before leaving and I plan on showing the full version to my Civil War class this year.  If you are a teacher I encourage you to purchase a copy through Pamplin Park’s online store.  It’s only $9.95 and I guarantee that you won’t be sorry.

Congratulations to Will Greene and the rest of the staff for this fine film.