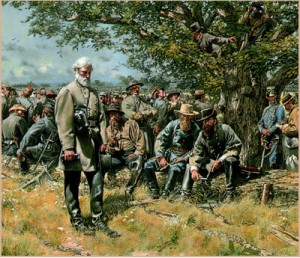 Thanks to the folks at the Civil War Preservation Trust for putting on a first-rate conference.  I had a great experience and I look forward to the opportunity to help out again next year in Franklin, Tennessee.  My panel discussion last night was successful.  The audience asked some very thoughtful questions about the role and use of technology in the classroom and this was after a long day of walking the Gettysburg battlefield.  I can’t say how impressed I am with this organization.  Nicole Osier did a great job organizing the conference and it was a pleasure meeting the rest of the staff, including Robert Shenk and Gary Adelman.  The CWPT understands that saving battlefields is about educating the general public, especially our students, who will one day be responsible for taking on leadership positions in this good fight.  I can think of no better way of showing my support than by joining the CWPT and I encourage you to do so as well.

I especially enjoyed my time at Gettysburg.  This was my first trip to the battlefield with a group and it gave me quite a bit to think about.  For one thing I can’t tell you how many times I overheard references to the movie, Gettysburg.  Workshop presenters referenced the movie as did participants in casual conversations, and it was even mentioned on the tour.  I don’t necessarily have a problem with this, but I have to wonder whether folks are able to distinguish between a Hollywood interpretation and the history of the actual site.  It’s as if people view the battle and its participants through the lens of the movie.  Luckily, I didn’t hear any references to Buster Kilrain.  Even though the movie was released back in the early 1990s it shows no sign of letting up.  The actors remain popular attractions and even Mort Kunstler’s paintings look more like the movie’s actors than the actual historical figures.  The strangest and, in my mind, the most disturbing aspect of this phenomena is the bench dedicated to Michael Shaara that was recently placed in Hollywood Cemetery next to the grave of George Pickett.  How this was allowed to happen is beyond me, but I encourage you to take photographs of yourself doing something disrespectful on it having some fun with it.

On our walk of “Pickett’s Charge” I noticed something else as well that struck me as curious.  I hope I can explain it.  It’s as if the entire war is condensed into those three days; this seems to be magnified when walking the July 3 battlefield.  Don’t get me wrong, I enjoy that walk just as much as the next person.  Take a few steps in any direction and the battlefield looks completely different.  But in the end the field doesn’t stand out for me compared to other battlefields.  It’s as if visitors believe that this is the first time that Civil War soldiers have lined up on an open field and marched toward a heavily defended position.  Actually, by July 1863 there isn’t anything unusual about such an attack.  Everything about the story seems to be magnified, but what I find most interesting are the presentist comments about the level of bravery as compared with soldiers in our modern day army.  How many times have we heard something along the lines of: “You couldn’t order soldiers today to make that charge”?  Again, it’s as if there was something unique about this particular attack.  Even if that were the case it wouldn’t tell us much of anything about Civil War tactics and motivation in the 1860s.  The fact is they did make those assaults over and over.

I guess it has something to do with the old saw of Gettysburg as the great turning point of the war.  Perhaps most people are reliving the movie when they walk on this particular battlefield.  For me it’s what makes visits to our Civil War battlefields so interesting.

[Painting by Don Troiani (Decision at Dawn)]
20 comments… add one

Previous post: I Guess Someone Didn’t Get the Message