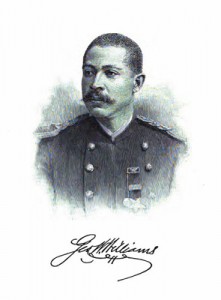 One of the most important sources within the early historiography of the early black counter-memory of the Civil War and the Crater is George Washington Williams’s, A History of the Negro Troops in The War of the Rebellion, 1861-1865 (1888).  Williams benefited from publication of the Official Records and includes entire reports to supplement the narrative.  [Click here for a short biographical sketch.]  A History of the Negro Troops is an incredibly detailed history of black volunteers that covers all of the major engagements from the Civil War in which they were involved.  Williams discusses discrimination in the army, the difficult relationship between enlisted men and white officers, as well as their performance on the battlefield.  Along the way Williams takes every opportunity to wax poetic about the significance of his subject:

The part enacted by the Negro in the war of the Rebellion is the romance of North American history.  It was midnight and noonday without a space between; from the Egyptian darkness of bondage to the lurid glare of civil war; from clanking chains to clashing arms; from passive submission to the cruel curse of slavery to the brilliant aggressiveness of a free soldier; from a chattel to a person; from the shame of degradation to the glory of military exaltation; and from deep obscurity to fame and martial immortality.  No one in this era of fraternity and Christian civilization will grudge the Negro soldier these simple annals of his trials and triumphs in a holy struggle for human liberty.  Whatever praise is bestowed upon his noble acts will be sincerely appreciated, whether from former foes or comrades in arms.  For by withholding just praise they are not enriched, nor by giving are they thereby impoverished.  (xiii-xiv)

At the critical moment, when the enemy could not only hold this opening in his works, but threatened to sweep through and rout Meade, the Black Division was ordered to charge and gain the crest beyond the crater.  Three veteran white divisions had been hurled back in confusion, but these Negro troops were sent forward to contend with an infuriated, brave, and numerous foe.  They were gallantly led, and nobly followed where duty and devotion were terribly tested…. They had borne themselves with conspicuous gallantry, and having done all that was required of them were withdrawn to their works….(249) The Negro soldiers’ valor was, after this engagement, no more questioned than his loyalty, and the reputation secured at such a high price was kept untarnished to the end of the campaign. (250)

What I find interesting is that Williams does not reference the slaughter of black soldiers after the battle.  Based on the sources utilized for his study it is clear that he was aware of it.  Perhaps Williams wanted to keep the focus on the bravery and manliness of the men, which would have been lost with descriptions of helplessness at the hands of angry Confederates.  I am going to have to give it some more thought.

Of course, I refer to Williams in my manuscript, but it is sad to think of just how much of what I have collected over the past few years will not make it into the book.  Oh well, I guess that is what the blog is for.