The Museum of the Confederacy’s Black Confederate Toy Soldier 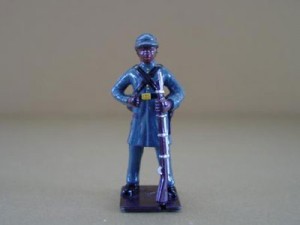 Update: Check out the follow-up post on this issue over at Past in the Present] [Hat-Tip to Greg Rowe]

Many of you are familiar with our friendly black Confederate toy soldier.  Brooks Simpson suggested that it would make a nice gift for me over at Civil Warriors a while back.  It’s easy to make too big a deal about a toy soldier, but I have to say that I am disappointed to see that it is being sold on the online gift shop at the Museum of the Confederacy.  I don’t know whether it is being sold at the museum itself, but I must assume so.  Let me point out that I have nothing but the highest respect for the staff at the museum.  It’s a Virginia treasure and their projects reflect the best in public history.  Most importantly, they do this with a limited budget and the suspicion of many who fail to distinguish between a museum for- as opposed to a museum about the Confederacy.

I know for a fact that the history represented by this toy soldier is not endorsed by the museum.  John Coski has authored a number of excellent essays on the subject that have appeared in North and South magazine and elsewhere.  It seems reasonable to ask that museum officials pull these items from their shelves.  Let’s take a stand on this insidious myth.