Pelican Press Does It Again 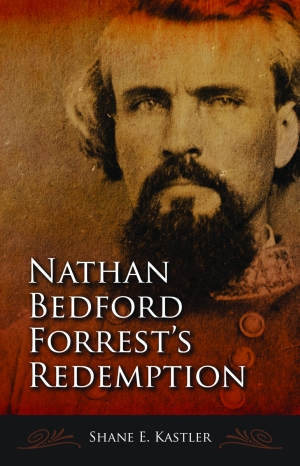 From the dust jacket:

Nathan Bedford Forrest remains a controversial figure in American history. Because of his days as a slave trader and his involvement with the Ku Klux Klan, the Confederate general is equated with racism. However, many may be surprised to know that he spent the latter days of his life as a pious Christian and an outspoken advocate of African Americans. This spiritual biography follows Forrest on his journey to salvation, focusing on the lesser known aspects of his life. Recalling his youth in the South, his experiences as an unyielding Civil War general, and his final years devoted to his renewed faith, eleven chapters span Forrest’s enigmatic life. Firsthand accounts from the diary entries of those who knew him and photographs reveal an obscure side of the soldier, a side that is often omitted from history books. His radical transformation provides the message that positive life changes are possible.

Who is the Author?: Shane E. Kastler is an ordained Southern Baptist minister who has devoted his life to preaching the gospel of Christ. He received his B.B.A. from Northeastern State University, where he became heavily involved in both the church and campus ministries. Afterwards, he earned his M.Div. from Midwestern Baptist Theological Seminary, one of six seminaries affiliated with the Southern Baptist Convention. Upon graduation, Kastler received the LifeWay Preaching Award, which is presented to a graduate who has excelled in the study and practice of preaching. Having served as senior pastor of the nondenominational First Christian Church of Pleasanton, Kansas, he continues to preach and write. He contributes a weekly religious column, “Seeking Higher Ground,” to the Linn County (KS) News in addition to maintaining two Internet blogs. Kastler lives with his family in Sand Springs, Oklahoma.

…and I decided to pursue an M.A. in history instead – silly rabbit.