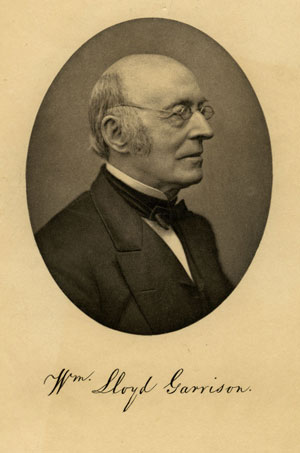 This week my AP classes are tackling the various reform movements of the Antebellum Period.  It should come as no surprise that we spend a great deal of time on the Abolitionist Movement and William Lloyd Garrison in particular.  This morning I began class with a fairly vague question to get the ball rolling that asked students to assess Garrison’s philosophy and goals.  Their responses are fairly typical and express a collective belief that Garrison ought to be admired for his perseverance and that his goals were laudable.  There is nothing necessarily wrong with such a response, but we should not pass up the opportunity to work to understand Garrison’s place both within the broader anti-slavery community and the society as a whole.  We do this by first sketching out the goals of the American Colonization Society, which united a broad swath of the population as well as notable political figures from around the country.  I then asked students to think about the implications of their goals of gradual abolition followed by colonization; what do these goals tell us about how Americans viewed slavery and race.  Most of the students were able to see that the program was intended to cause the least amount of harm to slaveowners while colonization suggests that many Americans were unable to imagine a racially integrated society.  This is the context in which to understand Garrison:

On this subject, I do not wish to think, or speak, or write, with moderation. No! no! Tell a man whose house is on fire, to give a moderate alarm; tell him to moderately rescue his wife from the hand of the ravisher; tell the mother to gradually extricate her babe from the fire into which it has fallen; — but urge me not to use moderation in a cause like the present. I am in earnest — I will not equivocate — I will not excuse — I will not retreat a single inch — AND I WILL BE HEARD.

This broader picture allows students to move beyond their own narrow interpretation of Garrison’s words and actions to a clearer understanding of the extent to which his understanding of race challenged the very foundations of American society.  This move from the personal to the historical is the bread and butter of historical inquiry and it is important, but it should not constitute the end of any classroom discussion about Garrison and the radical abolitionists. I want my students to have to work for their identification and approval of Garrison.  It’s one thing to identify with a cause whose broader narrative we can trace to its conclusion and one that is overwhelmingly approved.  It colors our interpretation of Garrison’s words and actions.  At one point I asked my students how they respond to people today who espouse views that are deemed to be on the fringes of society.  How might we respond to seeing someone burn a copy of the Constitution in public?  We discussed the extent to which we are comfortable being confronted by someone who stands on the fringes of society against a practice that is approved by the overwhelming number of people and who does so with the firm conviction of possessing the truth.  Most of my students acknowledged that unless they happened to agree with the cause that the tendency would be to give them the back of the hand or even worse.

Why does this matter?  It’s essential that students explore this aspect of the issue because it takes us beyond a narrow identification/sympathy with Garrison.  Understanding our difficulty acknowledging radical thought in our own culture allows students to sympathize more closely with a general public that was forced to confront Garrison’s doctrines.  While students are appalled by how Garrison was treated and thought of by mainstream society they come to appreciate that their own responses to instances of radical thought/behavior places them squarely in their camp.

Previous post: Dwight Pitcaithley on the Cause of the Civil War and Public History