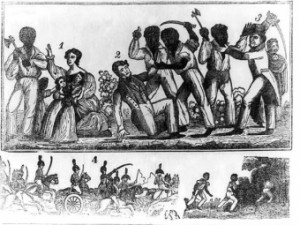 [Note: I took the photo from one of the two article cited here because of the text that accompanied it: “A new plaque commemorates a failed slave revolt in Quitman. This image depicts a successful uprising by Nat Turner in Virginia.”  It goes without saying that Turner’s rebellion was not successful.]
13 comments… add one