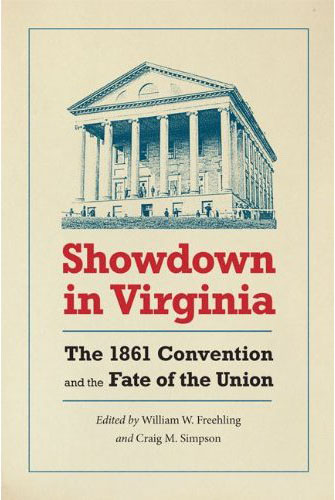 Tomorrow I head back into the classroom to teach the Civil War to my AP classes.  We are a little bit behind, but that is not going to stop me from giving my students a thorough overview of secession and the events that led to the clash at Fort Sumter and the subsequent decision on the part of Upper South states to secede.  This is not an easy task.  While the first round of Deep Southern states to secede is relatively easy to understand, the situation in the Upper South is a bit more difficult.  Where we find speech after speech calling for secession in response to a perceived threat to slavery by Lincoln and the Republicans the debate further north takes a bit more time to piece together.

Virginia is especially hard to grasp because most of my students are surprised to learn that the state, which would eventually become the capital of the Confederacy and the scene of some of the bloodiest battles, did not secede until after the Confederacy had already been formed.  In the past, I’ve tended to situate Virginia within the rest of the Upper South and focus on their economic ties with the North as well as the sheer size of the state, which included present day West Virginia.  In addition, I may have briefly discussed the vigorous debates between eastern and western Virginians over various tax issues that dominated the discourse into early 1861.  What is sometimes lost on my students and, I suspect, the general public is the centrality of slavery to the debates that took place during Virginia’s Secession Convention from February to April 1861.  There are a number of reasons for this.  First, in popular memory the story of Virginia’s secession is dominated by the emotional story of Robert E. Lee.  The story of the state and the Upper South stands in sharp contrast with the widely held belief in the Deep South that Lincoln and the Republicans constituted an immediate threat to slavery.  As a result, the documents available for classroom use are plentiful and ripe for interpretation.  In other words, students can really sink their teeth into it.  And that brings us to the final problem:  We just don’t have the same easy access to documents related to the Upper South as we do to the Deep South.  It’s a problem because while the debates in the Upper South were a bit more complex [Note: Daniel M. Crofts, Reluctant Confederates: Upper South Unionists in the Secession Crisis (Fred W Morrison Series in Southern Studies)

is still the best study on this region.] we run the risk of minimizing the importance of slavery.

This is the first year that I’ve had the opportunity to use William W. Freehling’s and Craig M. Simpson’s eds., Showdown in Virginia: The 1861 Convention and the Fate of the Union

.  For students of the Civil War and Virginia history this is a remarkable editorial achievement.  Freehling and Simpson reduced four volumes George H. Reese’s Proceedings of the Virginia State Convention of 1861 to one volume that numbers roughly 200 pages.  The nice thing about the book is that the speeches are excerpted, which makes it easy to assign specific readings for class discussion.  I’ve thought about having my students research and role play individual politicians that cover the entire debate.  The debate over slavery takes center stage in Part I, which pitted slaveholding Tidewater planters against their western nonslaveholding colleagues.  In short, the debate about Lincoln and the Republican Party was as much about the regional and political divide within Virginia as it is about Union.  Part II focuses on debates surrounding taxation, but even here slavery was present.  The most contentious issue here was the cap on taxation rates of slaves.  The volume is especially helpful in the wake of the firing at Fort Sumter.  Even after shots had been fired Virginia’s course had not been sealed.

I highly recommend this book to Virginia history teachers and general readers who are interested in a more thorough understanding of the secession crisis in Virginia.

Next post: Not Really A Review of PBS’s “Robert E. Lee”