So You Want To Learn About the Civil War? 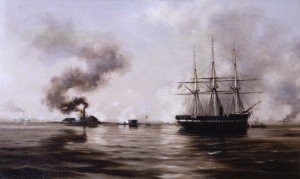 The Battle Between the Monitor and the Merrimack Xanthus Smith, c. 1880 (VHS)

Well, then head on over to the Virginia Historical Society for their new exhibit, An American Turning Point: The Civil War in Virginia.  I had a chance to sneak in for a few minutes today and it is well worth a visit.  It covers all of the important aspects of the war in Virginia and it does so with a wonderful selection of paintings, artifacts and interactive exhibits.  I am definitely going to have to go back and spend a bit more time. Most importantly, the museum offers a narrative of the war that reflects the best scholarship of the past few decades.   I will give you a sense of what I mean based on their printed guide:

Why Did the Civil War Happen? [Yes, slavery was crucial as a cause of secession & war.]

Slavery caused the war, but the war was not begun to free slaves.  The war had begun to determine whether the Confederate States of America would be allowed to break away as an independent nation, or whether the existing Union would survive.  Only later did the the conflict become one of liberation.  Why did the South want independence?  Southern wealth was mostly invested in slaves or slave-worked land.  Abraham Lincoln, newly elected president, led a party pledged to ban slavery in new states.

War or Murder? [Both Grant and Lee engaged in bloody assaults throughout the war.]

Throughout the war, both sides sought a single decisive victory long after it was clear that no such event was achievable…. Although Grant was called a butcher, Confederate losses, relative to the size of their army, were greater.

A few southern soldiers and civilians suggested as early as January 1864 that the Confederacy enlist slaves as soldiers, but most white southerners disagreed.  One Confederate politician noted that, “if slaves will make good soldiers [then] our whole theory is wrong.”  Desperate to avert defeat, the Confederacy authorized the enlistment of slaves on March 13, 1865, far too late to affect the outcome of the war.

Who Was the Traitor and Who the Patriot? [Virginians ought to remember their Confederates and Unionists.]

In 1861, pro-Union supporters defended the nation that had been created in 1776.  Pro-Confederates said they were exercising the right, enshrined in the Declaration of Independence, to “alter or abolish” unrepresentative and oppressive government.  Wherever a Virginian placed his or her loyalty–to the rebel nation of 1776 of the new rebel nation of 1861–he or she was a patriot to the eyes of some and a traitor to others.

How Did Slaves Support the Confederacy? [The Confederacy (including Virginia) went to war as a slaveholding society.]

Slaves and free blacks provided more labor than usual for Virginia farms when 89 percent of eligible white men served in Confederate armies.  Enslaved men were sometimes forced into service to build fortifications, women to serve as laundresses and cooks for troops in the field.  Fearful that they might lose their freedom if they failed to contribute to the war effort, free blacks often worked beside the slaves, for minimal wages.

Did the Civil War End At Appomattox? [We need to think about the war beyond Appomattox.]

Freedom as Confederate independence failed.  Defeat threatened to change white southern identity that had been based on racial supremacy.  Although black Virginians  were no longer enslaved, equality remained an unfulfilled goal for generations to come.