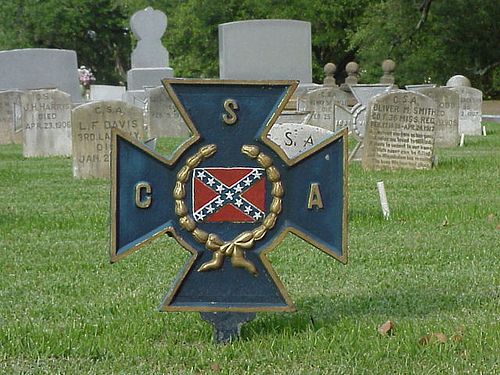 The PBS show, History Detectives, has completed filming an episode on Silas Chandler in West Point, Mississippi.  A few weeks ago I mentioned that I would be taking part in this show, but I recently learned that producers decided to take the story in a different direction and would not need my assistance.  I was a bit disappointed, but ultimately I just hope they get the story right.  Well, I have it on good authority that not only did they correct the mistakes made on the Antiques Road Show episode, but that investigators uncovered additional material that puts the nail in the coffin of the story that the Sons of Confederate Veterans and others have spread on their websites and other materials for years.  The show is scheduled to air in July or August.

I will share a small, but significant piece of news regarding Silas.  Back in the 1990s the Sons of Confederate Veterans placed a Southern Cross of Honor next to Silas’s grave.  The honor is bestowed only on Confederate veteran soldiers who served honorably during the Civil War.  By placing the marker next to his grave the SCV distorted Silas’s true identity and the important history that he represents.  Interestingly, when the film crew went to the graveyard the marker was nowhere to be found.  Hmmmm

On a different note, the Southern Illinois University Press was kind enough to send a complimentary copy of Timothy S. Sedore’s An Illustrated Guide to Virginia’s Confederate Monuments

.  It is organized geographically and includes brief descriptions of each site.  For those of you who insist on going out of your way to see some of the more obscure monuments this is an ideal book to keep in the car. I only wish the publisher sent it to me earlier so I could use it before my move to Boston in June.  Of course I had to turn to the author’s description of  the Confederate monument at Arlington, where I found this: “Included in the frieze is a Black Confederate soldier.” Sigh…

Previous post: What Will Become of the Black Confederate Controversy?: A Response