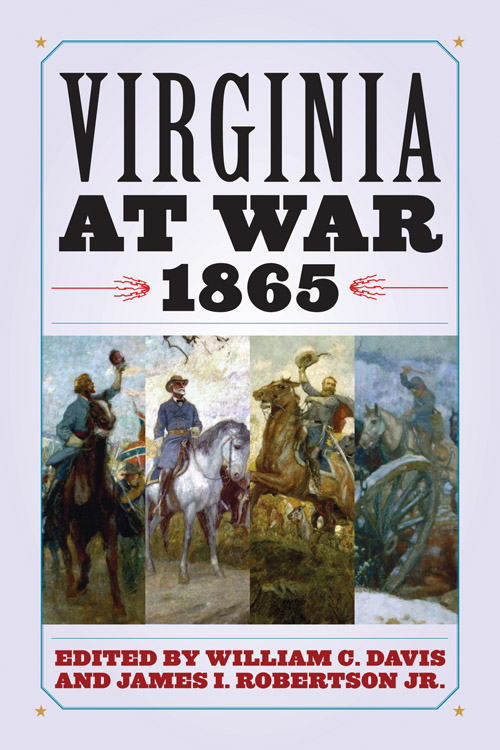 I wrote this essay so long ago that I almost forgot about it.  The other day I learned that the final volume [link to Amazon

] in the Virginia at War series edited by James I. Robertson and William C. Davis is now available for pre-order and is slated for publication in November.  I was asked to contribute an essay on the demobilization of the Army of Northern Virginia.  That is an incredibly broad topic and with my word limit I had to think carefully about how to narrow my focus.  In the end I decided to look at the first few weeks following the surrender at Appomattox and specifically at the experiences of the men as they walked home. The research process was difficult owing to the fact that so few men kept a record of their journeys home.  Here is a taste.

“When Johnny Comes Marching Home”: The Demobilization of the Army of Northern Virginia

Lawrence Taliaferro’s civil war should have ended on very familiar ground when he crossed the Rappahannock River by Fredericksburg shortly after the surrender of the Army of Northern Virginia at Appomattox Court House on April 9, 1865.  Instead, Taliaferro was struck by the drastic changes to the landscape.  Abandoned and rusting war machinery littered the ground as well as the bones of old mules and horses.  The surrounding forests had been leveled to serve the needs of warring armies throughout the conflict.  As Taliaferro traversed those final twelve miles to what he hoped would be the comforts of his family’s estate he became disoriented by the numerous paths that obscured a well-known road.  Eventually he lost his way and was forced to ask for directions.  An elderly black man, who Taliaferro later learned was an ex-slave of the family, escorted the confused and tired young man to his home.

Once home Taliaferro reunited with his father and sister and shortly thereafter an older brother who also served in Lee’s army.  With only a mule, horse, and a few ex-slaves who remained with the family the Taliaferro’s began the process of rebuilding their estate by collecting old bones and iron from the surrounding area, which they resold.  The Federal army, in recognition of the family’s hospitality during the war, supplied mules and food, which no doubt furthered the process of rebuilding and perhaps even a sense of optimism that a brighter future was possible.  No amount of succor from the Federal army, however, would have blinded Lawrence Taliaferro as well as his family to the challenges they would face in the immediate future.

The confusion and uncertainty that Lawrence Taliaferro experienced on his journey home was repeated along countless roads and paths throughout Virginia.  Unfortunately, much of the literature on the Army of Northern Virginia and the Civil War ends with the furling of flags and the stacking of arms on the surrender field at Appomattox. While the army ceased to function as the military arm of the Confederate government it did not cease to exist following the surrender ceremony on April 12; rather it slowly dissipated along the roads leading to destinations around the South.  Our tendency to end the Civil War narrative on April 9, 1865 and our attraction to stories of reconciliation obscures or minimizes the connections between the war and the post-war challenges surrounding emancipation and subjection to Republican rule which defined the era of Reconstruction.

A survey of the experiences of Lee’s men in the first few weeks following their surrender at Appomattox can serve to challenge our tendency to infer a sharp distinction between the war years and Reconstruction.  Indeed, many of the fears and lingering questions that Confederates traveled home with would play out in the following decades.  For the newly minted veterans of Virginia the journey may have been more emotionally and psychologically taxing given the close connection between defense of home and nation.   It is not a stretch to imagine soldiers contemplating their futures, or more specifically, whether they would face retribution from the federal government in the form of disfranchisement or property confiscation.  Many worried about what a post -emancipation social order would look like with the federal government now in control and the U.S. army in a position where it could realize the worst fears of white southerners associated with images of racial amalgamation – the very social order the Confederate army was intended to defend.   The end of the war raised profound questions of identity that civilians and soldiers would have to answer.  White southerners occupied a precarious position in the days and weeks following the end of the war as they clung to their former Confederate selves and wrestled with whether they could embrace their prewar identification as Americans.