Update: After hearing from one of my readers I decided to pick up a copy of the book and write a detailed review for a major publication. Stay tuned. 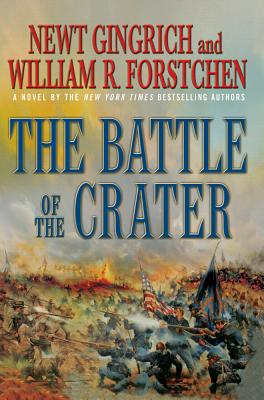 One of my readers was kind enough to forward a review of Newt Gingrich’s new co-authored book, The Battle of the Crater: A Novel

.  I am not a fan of Mother Jones, but the review is actually quite interesting and clearly reflects that politicization of one of the most racially significant battles of the Civil War.  No, I have not read the book and I don’t have any intention of doing so.  Consider the following:

The novel is intended in part to honor the black regiments that saw action at the Crater and help correct the narrative that says they cost the North the battle. (In fact, they nearly won it.) But in correcting one narrative, it whitewashes another, because none of the rebels we meet in Crater carry with them much animus to black soldiers. The only Confederate we see in any level of depth is a former journalist who, as a matter of principle, never owned any slaves. Our rebel points out, accurately, that not all black POWs were murdered—but that’s sort of splitting hairs when you consider that battlefield accounts describe white Confederates bashing in the skulls of surrendering and wounded black soldiers “like eggshells.”

I guess this is just what one would expect when the goal is to attract the African American community while at the same time not alienating white constituents, who are not likely to be interested in reading about how Confederates responded to the presence of an entire division of United States Colored Troops.  It’s not as if the authors didn’t have access to archival records; in fact, I came across the “eggshell” reference more than once in the course of my own research.

The significance of the battle for Confederates (both slave and non-slaveowners alike) has everything to do with its racial aspect.  Even a cursory glance at the archival record demonstrates that they did not make any effort to conceal what they did and why.  They wanted their loved ones back home to understand just what was at stake in the event of Confederate defeat.  It’s not just Confederate attitudes that appear to be ignored, but by Union soldiers as well.  Their response to the participation of the 4th Division was mixed as opposed to the consensus achieved by Confederates, but you can find plenty of blame and racial invective hurled in their direction.  [Of course, I go into great detail about all of this in my forthcoming book on the Crater.]

How far will Newt and Forstchen go to tailor a story to meet the demands of a presidential campaign?

Instead, the authors veer in the other direction. Gingrich and Forstchen even craft an imaginary scene in which General Robert E. Lee, the embodiment of Southern honor, instructs his subordinates to make clear that black soldiers at Petersburg are to be treated like any other opponent. But there’s no historical evidence that Lee gave any instruction of the sort. Nor did Lee intervene in the immediate aftermath, when his army pushed to return black POWs to their former masters.

Even in the world of historical fiction this takes things way off the deep end.  There is no exaggeration in the passage quoted above.  At no point did Lee intervene in the immediate wake of the battle when it is likely that the largest number of black soldiers were massacred nor did he attempt to prevent the return of prisoners to former masters.  Why?  Because in the wake of emancipation and a protracted defense of a civilian population in Petersburg the July 30 battle reaffirmed nightmarish images of defeat at the hands of armed black men.

I guess none of this helps much in Newt’s presidential bid.