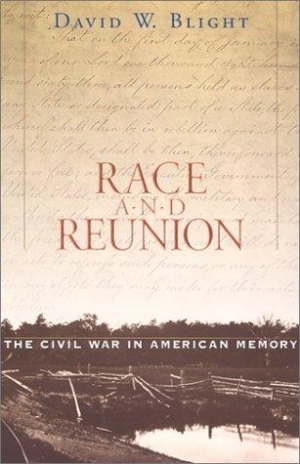 If you haven’t read Brian Matthew Jordan’s reflections on David Blight’s Race and Reunion: The Civil War in American Memory

ten years later head on over to The Civil War Monitor and do so.  It’s an incredibly thoughtful piece and much of it I agree with.  Blight’s book has had a huge influence on my interest in the Civil War generally and specifically in regard to questions of memory.  Toward the end of the essay Brian suggests that we need a “new geography of Civil War memory”:

One unfortunate (and I think unintended) consequence of the laudable efforts of recent historians to reposition race and slavery at the heart of the conflict is that the Civil War has become the nineteenth-century’s equivalent of “the Good War”—not, as the historian Edward L. Ayers has so eloquently pointed out, a “problem to be explained,” but, rather, a modern-day morality play that we tell and re-tell in an effort to exorcise white guilt. Massive death, destruction, and suffering are effortlessly explained away and left un-interrogated because they contributed to the demise of slavery in America. The blood spilled on battlefields from Big Bethel to Palmito Ranch, we are reassured, cleansed the nation of its collective sin. And as soon as that blood washes away the sin of slavery, that blood is itself washed away. The Civil War, we are told, was a necessary national sacrifice. It is time that we critically examine this sanitizing process and its manifold implications.

I am not sure I agree with Brian’s analysis here.  It seems to me that the cleansing of the “destruction and suffering” of the Civil War had been accomplished long before our collective memory took a turn toward a narrative with emancipation at its center.  The veterans themselves bear witness to this point.  James Marten

argues that a wide range of factors influenced how Americans during the postwar decades responded to their veterans, who bore the physical and psychological scars of war.  Many veterans experienced disillusionment as those around them pushed their sacrifices off the public stage in light of changing definitions of manhood and bravery.  Blight’s emphasis on the pull of reconciliation and reunion also contributed to this cleansing as well as a growing international presence buttressed by a belief in American Exceptionalism.

Popular culture today seems to have little patience with coming to terms with the death and destruction of the Civil War, which you can see reflected in such things as reenactments and movies.  We seem much more comfortable pointing out the scale of violence and long-term damage in civil wars elsewhere.  In contrast, our civil war was somehow special or unique.  I also don’t see the focus on emancipation in recent scholarly studies of Civil War memory as part of a narrative that downplays the “hard hand of war” in order to emphasize a “Good War” or as part of an effort to “exorcise white guilt.”  If anything, recent scholarship has reinforced a long-term narrative of “promises unfulfilled” rather than a rebirth in 1865 that replaced bondage for freedom.  Even Ken Burns’s celebratory documentary sounds an alarm in the last episode over questions of race and rights in the Jim Crow era.

Those are just a few thoughts.  It is entirely possible that I missed Brian’s point entirely. What do you think?

, which I eventually plan on reading.  Oh, and he wrote while still an undergraduate at Gettysburg College.