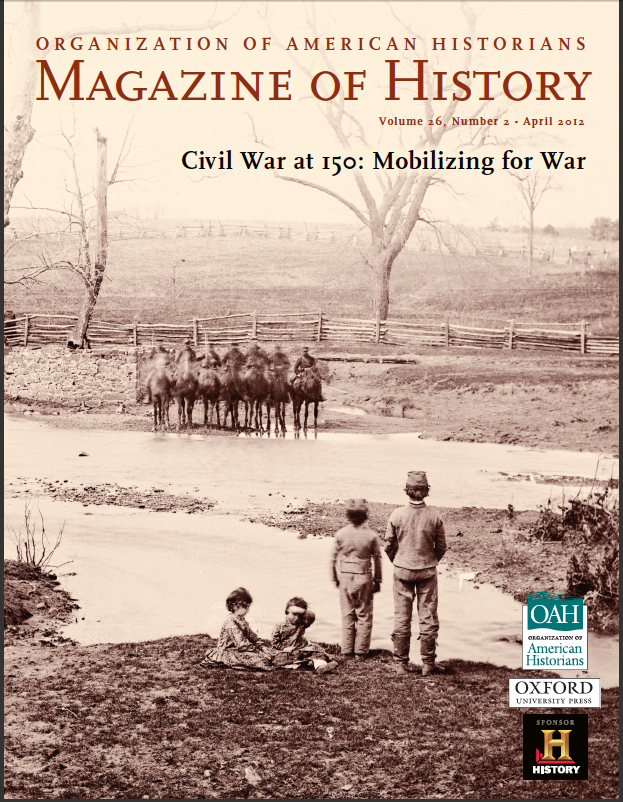 The latest issue of the Magazine of History will be mailed to subscribers in the coming day and it’s a good one.  This is the second in a series of Civil War themed issues that will be published throughout the Civil War 150th.  This issue focuses specifically on the mobilization of war and includes essays by Joseph Glatthaar, Thavolia Glymph, Louis Masur, and Joan Cashin.  Carol Sheriff served as the guest editor and did a great job of pulling everything together.  I greatly appreciate the invitation to contribute an essay to this issue.

My essay, “Teaching Civil War Mobilization With Film,” offers teachers strategies for introducing this subject through such movies as Gone With the Wind, Shenandoah, and Glory.  I also focus a bit on the importance of treating these films as cultural artifacts that must be interpreted as reflections of the time in which they were produced.  All too often students passively observe films and arrive at the mistaken belief that what they are seeing is history.

A few of us put together a panel based on our essays for the annual meeting of the Organization of American Historians, which meets in a few weeks in Milwaukee.  Stop by and check it out.

Almost forgot one thing.  If you teach American history, you should subscribe to this magazine.  It’s an incredible resource.