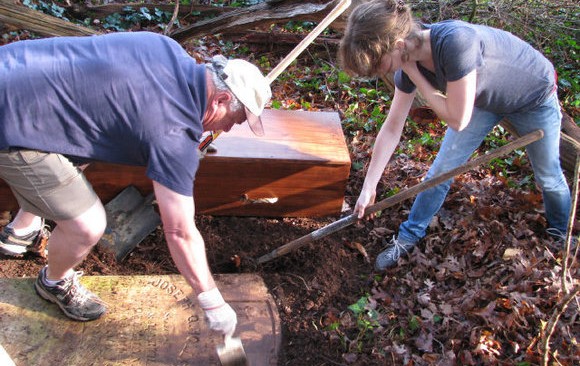 This is just downright bizarre.  This past weekend in west Raleigh, North Carolina the local SCV dug up and moved the remains of the Holleman brothers, one of who was a Confederate soldier.  According to the story, the graves were marked and were not threatened by any type of encroachment.  The remains of both men were moved to nearby Oakwood Cemetery.  And why did their remains need to be removed?  According to SCV member, Donald Scott:

We know these young men have left their earthly shell.  We want to respect and honor these remains, even though we know their souls are with you. They were Tar Heels. We don’t want them lost…. My heart says this is the right thing.  These boys have been here 150 years. Their blood is our blood.

The only problem with this explanation is that these two men have not been lost.  Other than what Scott’s heart told him there doesn’t seem to be any compelling reason to desecrate these graves.  There is no indication that the people who disinterred the two bodies have any archaeological training.  Joel Holleman wasn’t even a Confederate soldiers.  He was a teacher.  What I don’t understand is why the SCV didn’t make the effort to improve the existing site.  It looks like at least one of the headstones is completely intact.

Perhaps the SCV can turn this into a new reality show along the lines of American Diggers.