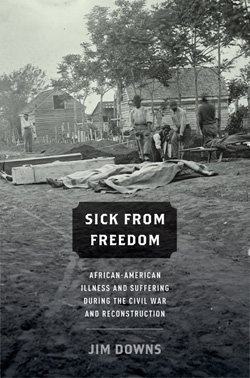 , is making somewhat of a splash in the mainstream media.  Articles have recently appeared in the New York Times, The Guardian Observer, and Daily Mail.  I am reading it now and I can’t recommend it highly enough.  It tells an important story that not only adds to our understanding of the challenges and consequences of emancipation, but forces us to step back to evaluate how we as a nation remember the Civil War itself.

You might be surprised by the folks who are jumping on the Jim Downs bandwagon.  First, we have the Sons of Confederate Veterans, who reprinted the Daily Mail article in its entirety on their blog.  They no doubt see this book as supporting the timeless Lost Cause chant that slavery as a system was benign and that slaves would have been much better off in the long term under the care of their masters.  And then we have Thomas DiLorenzo at the Lew Rockwell blog, who uses the book to support his view of the Lincoln administration’s ultimate goal of genocide and expansionism on the Plains and imperialism overseas.  Finally, we have Richard Williams, who has built his blog around warnings concerning academics like Jim Downs.  He, apparently, also likes what he sees.

You will not find any kind of analysis of Downs’s actual argument on any of these sites.  In fact, I can guarantee you that neither DiLorenzo, Williams or anyone at the SCV will read it.  Why?  Because they are not interested in historical interpretation.  History is little more than competing narratives that must be attacked or defended.  What they are looking for is support/vindication of broader political assumptions and/or sacred narrative truths.

It’s just hard not to crack a smile when that vindication comes from the community that is regularly condemned by these same individuals.    With that, do yourself a favor and read the book.

Previous post: The American Civil War Brought To You By Nascar