I haven’t commented on what Brooks Simpson refers to as “the gift that keeps on giving” in some time, but news that Ann DeWitt is once again posting is too good to pass up.  You know Ms. DeWitt as the person who discovered an entire regiment of black Confederate cooks and the owner of one of the most confused websites on this subject.  She is now posting under the name “Little Rebel” and it looks like Ms. DeWitt’s “research” interests have led her to a subject near and dear to my heart. 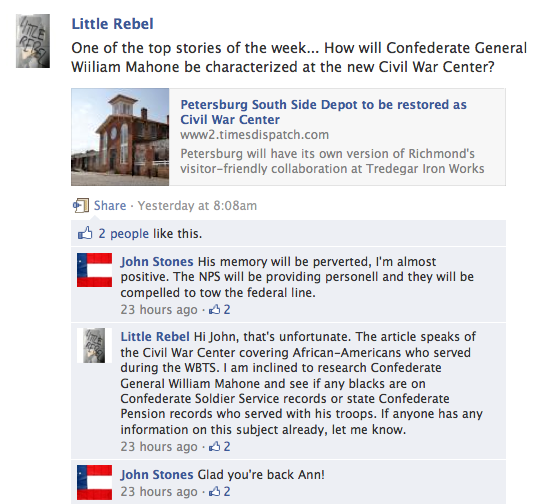 Yes, we all can’t wait for the next big discovery.  In the eight years that I’ve spent with Mahone’s men I have never come across a reference to anything other than body servants and impressed slaves.  This is not to say that Confederates under Mahone’s command did not have black soldiers on their minds.  They wrote a great deal about an entire division of black soldiers, who took part in the battle of the Crater and they wrote openly and approvingly about their massacre.  In all the letters, diaries, and postwar accounts penned by Confederates who were there not one mentioned their own loyal black soldiers.

Spend enough time with what Confederate soldiers actually wrote and you will have some idea of why the Confederacy struggled with the question of the enlistment of blacks.