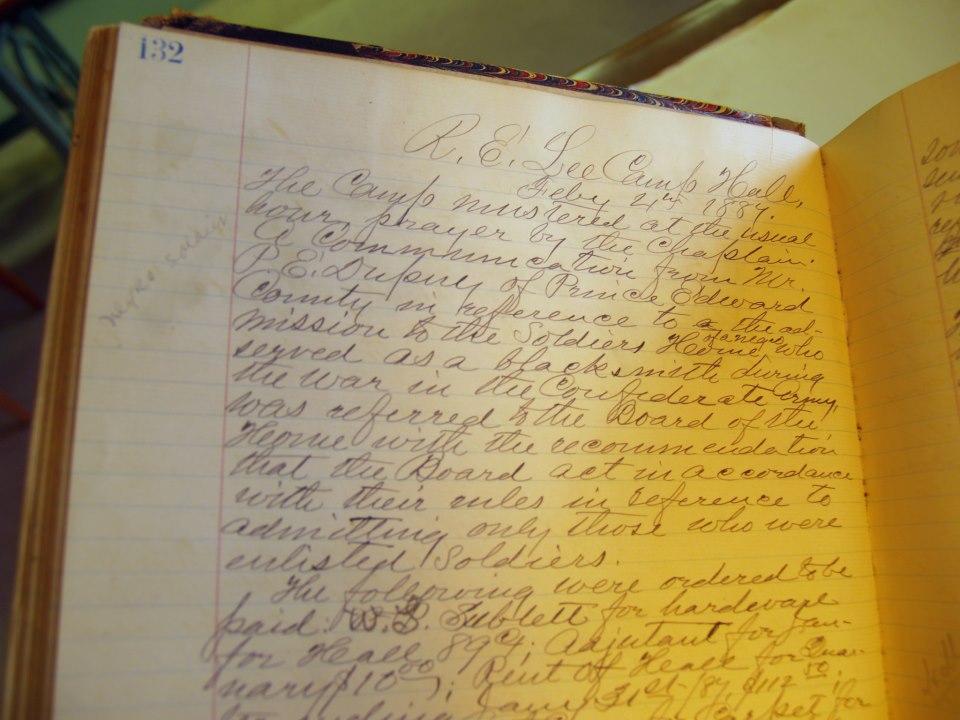 I came across this little gem this morning while perusing the SHPG’s Facebook page.  It’s a photo of a page from what I believe is the Minutes of the R.E. Lee Soldiers’ Home in Richmond.  In it is a brief reference to a black man, who was present in the Confederate army as a blacksmith.  His application for admission to the home was rejected based on what should be obvious.  It was recommended that the “Board act in accordance with their rules in reference to admitting only those who were enlisted soldiers.”

While it would be a mistake to read too much into this brief reference, what I find interesting is that there is no indication of an investigation into this individual’s status.  In other words, there is no implicit assumption that it might be possible to admit a black man into the soldiers’ home.  The other photo of older black Virginians on the grounds of the home doesn’t add much to the issue at hand.  They are not identified.  A few appear to be wearing pieces of old uniforms as well as what I believe are reunion ribbons.

The author of the post titled it, “Negro Soldier – Rejected for Admission at the Soldiers’ Home in Richmond.” It’s an awkward title given that the institution in question concluded that he was not a soldier.  Later he says, “I believe in their hearts, they wanted to belong to those they served, although – not allowed to Enlist.”  I assume this is a reference to the application in 1887.  There is likely a certain amount of truth to this statement depending on the nature of his experience during the war, but that doesn’t get us very far at all.  In fact, I would suggest it tells us more about what the poster hopes to believe about this individual.  What you need to believe is ultimately irrelevant to what we can know through a careful examination of the available evidence.

For me, it raises a host of questions.  If we could identify the individual in question it would help to know a bit about his economic situation by this point in time. Did he have a family and a job?  Was he homeless or soon to be?  Was he familiar with the men already living in the home?  Did he attend reunions?  What this individual thought about his war experience and what he felt about the men around him (then and now) is anybody’s guess.

To conclude that he applied simply because he “wanted to belong” not only reflects a lack of imagination, but a lack of understanding of what is involved in serious (or even not so serious) research.

Next post: Ku Klux Klan to Rally For One of Their Own