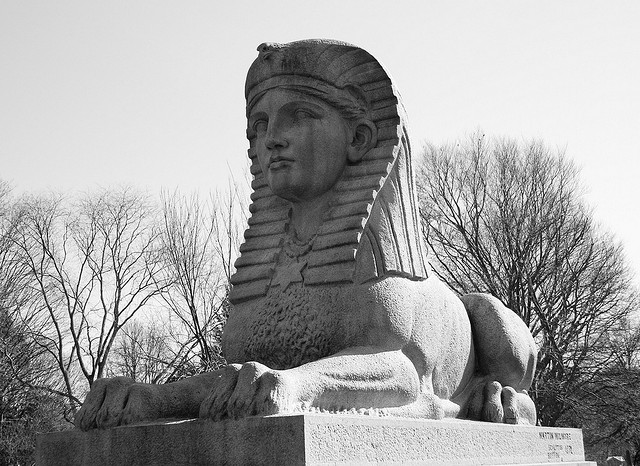 It is one of the most unusual memorials on any Civil War commemorative landscape North or South.  I vividly recall my own loss for words during my first trip to Mount Auburn Cemetery in 2011.  It is a stop at the top of my list for next year’s Civil War Memory class and thanks to Joy M. Giguere’s essay in the March 2013 issue of The Journal of the Civil War Era I now have a bit more interpretive ammo under my belt.

The essay focuses on Jacob Bigelow’s vision for the memorial, which he both paid for and designed.  Giguere suggests the following:

To best understand the gendered and racial ramifications of Bigelow’s design, however, the Account provides the most revealing statement: “The Sphinx most known in antiquity was an ideal personfication of intellect and physical force, expressed by a human head on the body of a lion.  It was a favorite emblem in Egypt, and was variously copied by Greeks, Romans, and other nations of later times.”  The monument’s design, which fuses the Anglo head with the lion’s body (presumably the most overtly African element), maintains a traditional racial hierarchy even as it represents a racially united nation.  In his vision for postwar America, white intellect would lead the nation, while the free black population–the “physical force”–would continue to function as the labor force, the physical muscle.  Bigelow’s choice of a female face–one clearly derived from classical sculpture–provides an added layer of gendered as well as racial connotations to his vision.  The face could at once be viewed as the allegorical Columbia, Liberty, Hope, or Victory–traditional images, all of which possessed similar classically derived features–but she could also be viewed as the epitome of northern white middle-class femininity.  The nineteenth-century ideal of the  “domestic angel” of the household, armed with such qualities as Christian piety and moral superiority, she represented both Caucasian superiority in her whiteness and such qualities as peace and benignity her femininity.  (p. 71)

There is quite a bit more to consider in this article, especially the contrast between Bigelow’s sympathetic prewar stance on slavery and his eventual position against the “peculiar institution” that was shaped by the war itself.  The article also contains an excellent overview of the influence of the Egyptian Revival movement on American culture. One of the things that I hope to emphasize with my students next year is that crucial distinction between race and slavery that is so difficult to crack.

Previous post: Return to Charlottesville and the Virginia Festival of the Book