Update: Richard Williams has decided to respond to this post on his blog. What I find interesting is that he has nothing to say about the content of the post. Instead he takes issue with one of my comments about my characterization of his understanding of the influence of Nat Turner’s Rebellion on race/slavery and religion in Virginia.  Williams declares that many academics are “cynical” about attempts on the part of slaveholders to teach the gospel yet he provides not a single reference.  It is unclear as to why this should matter to begin with. Their attitude is irrelevant.  What matters is the interpretation.  A quick perusal of the bibliography points to an over reliance on relatively few secondary sources, which is why I take issue with his analysis of religion in a slaveholding society.  There simply isn’t much to work with.  I will leave it to you to judge. 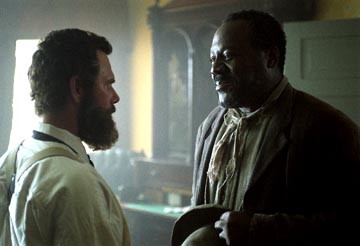 Jim Lewis and Jackson in “Gods and Generals”.

.  In it he discusses the purchase of a camp servant named Charley and a horse.  Interestingly, Alexander refers to both as an “appendage”.  That reference, I believe, tells us a great deal about race relations in the South as well as the value of enslaved blacks to the Confederate war effort and individual officers who utilized personal servants.

Today I was surprised to find an even more explicit reference to a slave and a horse in Richard Williams’s book, Stonewall Jackson: The Black Man’s Friend

, which is a wonderful example of the continued influence of the loyal slave narrative.  This time it’s Jackson’s servant, Jim Lewis, and his horse, Old Sorrel.  Williams’s reference of this passage is to James I. Robertson’s biography

The servant and “Old Sorrel being about the same color–each having the hue of gingerbread without any of its spiciness–their respective characters were in a concatenation accordingly.  For they were equally obedient, patient, easy-going and reliable; not given to devious courses nor designing tricks; more serviceable than showy and, altogether, as sober-sided a pair of subordinates as any Presbyterian elder with plain tastes and a practical turn, need desire to have about him.  Both man and horse seemed to understand their master thoroughly and rarely failed to come up fully to all his requirements.

Both Williams (pp. 138-39) and Robertson (p. 291) quote this passage without any attempt at analysis.  Williams utilizes this passage in a chapter devoted to the “intimate” relationship between Jackson and Lewis that relies almost exclusively on postwar sources.  More troubling is the extent to which Williams allows others to speak for Lewis.  We learn nothing about how Lewis viewed his relationship with Jackson, which is a staple of these loyal slave accounts from the postwar period through to today.

I am not suggesting that Jackson and Lewis did not establish a close relationship with one another, but whatever relationship developed between the two it must be built on evidence and interpreted within the culture of a slave society at war.  Boteler’s description of man and horse tells us very little about the complexity of a relationship during wartime, but it does tell us something very important about how white southerners continued to imagine a hierarchy based on race long after the end of the war and the end of slavery.

Next post: Should This Confederate Flag Be Allowed in School?