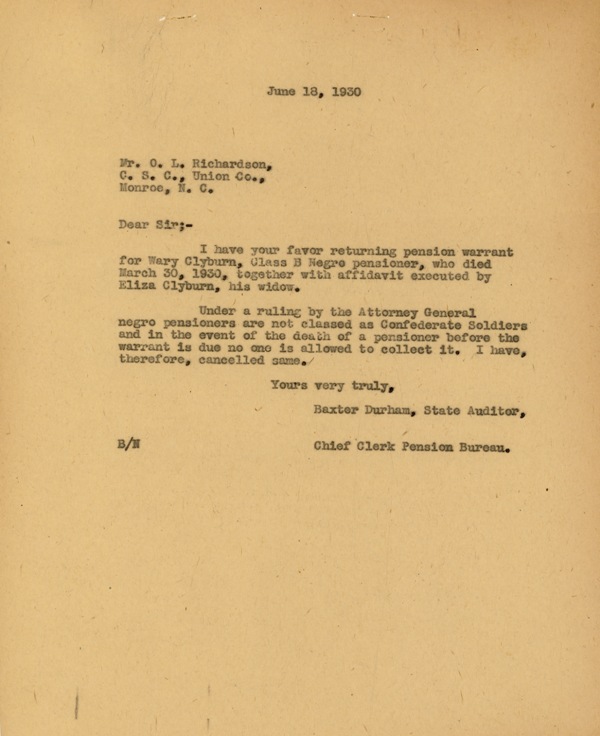 Thanks for taking the time to read yesterday’s post and for your comments. As I stated in my response this is a subject that I’ve written and lectured on extensively over the past five years.  The popularity of the black Confederate narrative highlights both the extent to which history has become democratized and the increased use of the Internet as a research tool.  Many people first learn about this subject through the print and/or online newspaper, which offers a non-critical and often flawed account of the complex history involved.

This article out of North Carolina that appeared today offers another textbook example of what is wrong with the way this subject is often analyzed and presented to the public.  The story of Weary Clyburn is one I’ve been following for a couple of years.  He is arguably one of the most popular examples of a black Confederate soldier that never existed.  Maddie Rice is sincerely interested in the story of her father, but over the years she has been aided by heritage organizations such as the Sons of Confederate Veterans, who have publicly distorted the history of Clyburn to serve their own needs.

We also see what happens when people conduct “research” without any proper training and without any sense of the relevant historical context of their subject.  Hunting down documents has little value if you don’t understand what you are looking at.

Weary was a slave born in Lancaster County, S.C., around 1841. Raised on the Clyburn plantation, he ran away with his master, Thomas Frank Clyburn, to fight on the Confederate side of the Civil War.

“I always say that I guess they thought I was playing, but I was listening,” Rice said. “It was fascinating to me how they lived a different life from me. I couldn’t figure out why they were slaves and why they had to do all this fighting.

“I got a job working for the government, and when I got paid, I got a green check,” Rice said. “I remember going to the bank with my father and him cashing a green check, so I started searching to see where that check came from.”

Notice how Ms. Rice blurs the distinction between soldier and slave.  We are told at the beginning of the article that Clyburn was born a slave, but ended up in the “service” of the Confederate army.  Clyburn “ran away with his master” and he “went into service with his master’s son.”  Where is the coercion of the master-slave relationship in Rice’s understanding of why her ancestor ended up in the army.  Clyburn was a not a “Pensioner of Color” or “Colored Confederate” or even a “Black Confederate”.  He was a slave to the family of Thomas F. Clyburn.  Like thousands of other slaves he ended up in the Confederate army as an extension of his master’s will.

Rice, 90, said it took her 55 years to find her father’s pension record.

“I got a job working for the government, and when I got paid, I got a green check,” Rice said. “I remember going to the bank with my father and him cashing a green check, so I started searching to see where that check came from.”

Curiosity piqued, Rice went to Monroe and found her father’s old pension record in the old courthouse. That piece of paper, she said, allowed her to get further documentation on her father.

The problems continue with the pension file that Rice discovered.  Again, it is unclear as to whether Rice understands the origin of her father’s pension.  It appears that she believes it is evidence of his service as a solder, but this is simply not the case.  The pension that Clyburn was awarded acknowledged his presence in the army as the slave of Frank Clyburn and not as a soldier.  Former Confederate states instituted these pensions long after Confederate soldiers pensions were awarded.  In fact, if you look closely at these documents they state explicitly that they are not meant as compensation for former soldiers.  This is crucial if we are to understand the history of these men, both during the war and throughout the postwar years.

It is unfortunate that so many years later Ms. Rice is still unclear about even the most basic elements of her father’s history.  I am likely going to be criticized for challenging Ms. Rice’s understanding of her father’s story, but it is the integrity of his story, the broader history of the Confederacy and the United States that is on the line here.  Thanks again for taking the time to read my blog.