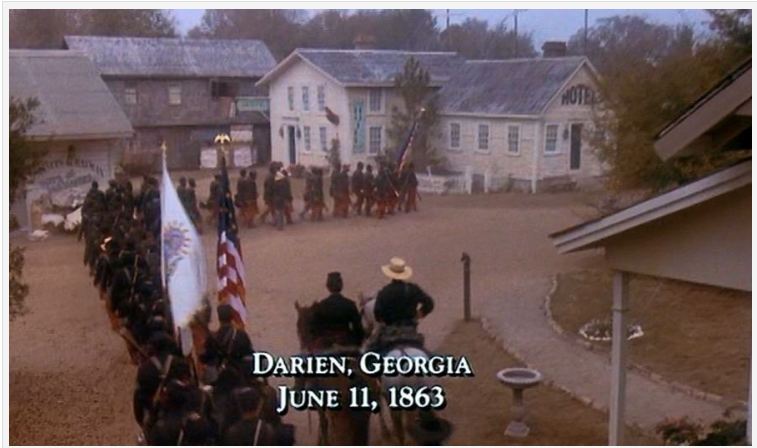 With the 150th anniversary of the burning of Darien, GA approaching one local historian hopes to vindicate Col. Robert Gould Shaw of any responsibility.  We all know the scene in Glory when Shaw orders his men to torch the town only after the threat of court-martial by Col. James Montgomery of the 2nd South Carolina Volunteers.  Montgomery and General Hunter play the perfect villains in the movie, which ultimately leads to a transfer for the 54th Massachusetts Volunteer Infantry from hard labor to combat and glory at the base of Battery Wagner in July 1863.  It’s hard to know what McIntosh County historian Buddy Sullivan has planned for the commemoration beyond reminding his community that the raid did not take place during Sherman’s March of 1864 and that Shaw was indeed following orders.

Most of us know about this little incident from Glory and the movie gets a lot right.  Yes, Shaw disapproved of Montgomery’s order to join his unit and burn Darien.  According to historian Russell Duncan, “Shaw believed the action unjustified and disgraceful, and said he could have assented to it only if they had met Rebel resistance.” (pp. 43-44)  Shaw was concerned about the negative publicity that eventually was reported in northern and southern newspapers.  While it is true that Shaw was forced to follow orders it’s not clear whether noting that Col. Montgomery was also carrying out direct orders from General David Hunter will make it into Sullivan’s upcoming presentation.  Better to have a foil with which to vindicate Shaw.

It should also be noted that while Shaw clearly spoke out against what happened at Darien that in his accommodations in the Sea Islands he, according to Duncan, “added its furnishings with accent pieces from Darien.” (p. 46)  There is a also a great deal about Shaw’s relationship with and opinion of Montgomery that is obscured owing to the Glory narrative.  For example, when writing to his wife Annie on June 12, 1863, just after the Darien raid, Shaw declared, “Montgomery, from what I have seen of him, is a conscientious man, and really believes what he says,–‘that he is doing his duty to the best of his knowledge and ability.’”  Two weeks later Shaw described Montgomery to his mother as “being a very simple-minded man—and seems to be pleased at any little attention—perhaps because he has been so much abused.  You will see that he is very attractive to me, and indeed I have taken a fancy to him.” Again, will Sullivan mention this or will Montgomery be playing his movie role in this presentation?

Sullivan hopes to focus the attention of his audience on Shaw’s final assault outside of Charleston at Battery Wagner in which he, along with many of the men in his unit, made the ultimate sacrifice.  It is not clear whether Sullivan will mention that Montgomery also participated in the assault on Fort Wagner.

I sense a little tension in this upcoming commemoration.  On the one hand, no one would ever have heard of the burning of Darien if not for the fact that the 54th Mass. was involved and a popular Hollywood movie was made about it.  At the same time it appears that some people in the community believe that this event was part of Sherman’s March.  I suspect that not much will be done to challenge the popular view of Sherman’s 1864 campaign through Georgia, but in attempting to revise our understanding of the Darien Raid we are left to wonder whether new myths are being generated about Shaw, the 54th and black soldiers generally.  It’s not simply that their involvement was forced. We need to believe that Shaw and the 54th could never have been willing participants in such an act.

Previous post: Another Gettysburg Book? What Will the Buffs Say?