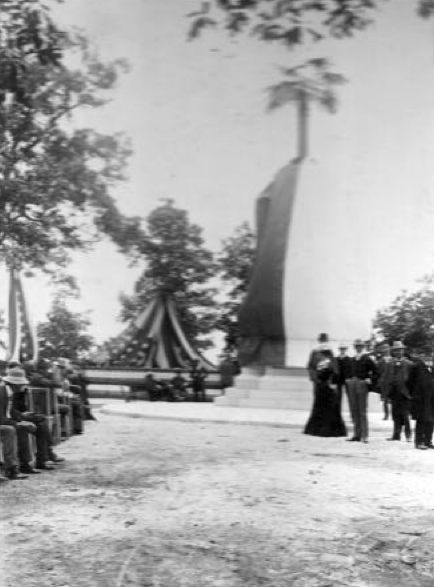 Looks like I missed a great deal of Virginia Flagger silliness while away on my Civil War road trip. The group of teachers I was with heard about their plans to place a large Confederate flag on I-95 to welcome people to Richmond (and here). I used the media attention to highlight the dynamics of Civil War memory while leading the group down Monument Avenue.

A few of the teachers immediately interpreted this story as evidence of a strong reactionary element in the South that will never move beyond the Lost Cause. I stressed that, if anything, these people represent a relatively small segment of the population. In the end, this is little more than a rear guard action or a reflection of just how marginalized these people have become in a city that has made great strides on the racial and Civil War memory fronts in recent years.

This obsession with the visibility of the Confederate flag on the part of the Flaggers stands in sharp contrast with its use during the height of monument dedications at the turn of the century. It should come as no surprise that Confederate veterans didn’t prance about or demand the flag be placed in locations simply so it could be seen for miles around. This is the flag they marched into battle with. It served a specific purpose. This plan on the part of the Flaggers has nothing to do with honoring the Confederate soldier and has everything to do with the desperate attempts on the part of Susan Hathaway, Tripp Lewis and others for media attention.

While touring the visitor center on the Chickamauga battlefield I came across a remarkable photograph of the unveiling of the South Carolina monument in 1901. I wish the image was clearer, but what stands out is the presence of the American flag front and center. I’ve found one photograph of what appears to be a veteran holding a small Confederate flag, but as far as I can tell it was not featured prominently in the ceremony.

Confederate veterans didn’t need to engage in “flagging” tactics to remind the nation of who they were and why they fought. Their history and heritage extended way beyond the public display of the Confederate flag. Ultimately, the vast majority of these men self identified as Americans first by the beginning of the twentieth century even if they never turned their backs on the cause for which they fought. I would suggest that the Virginia Flaggers lack any historical or political context with which to appreciate this photograph.

In fact, given their obsession with the display of the flag,  the Flaggers must view these men as having turned their backs on their Confederate past/heritage.