Update: Ted Savas has issued a formal apology at his blog site. 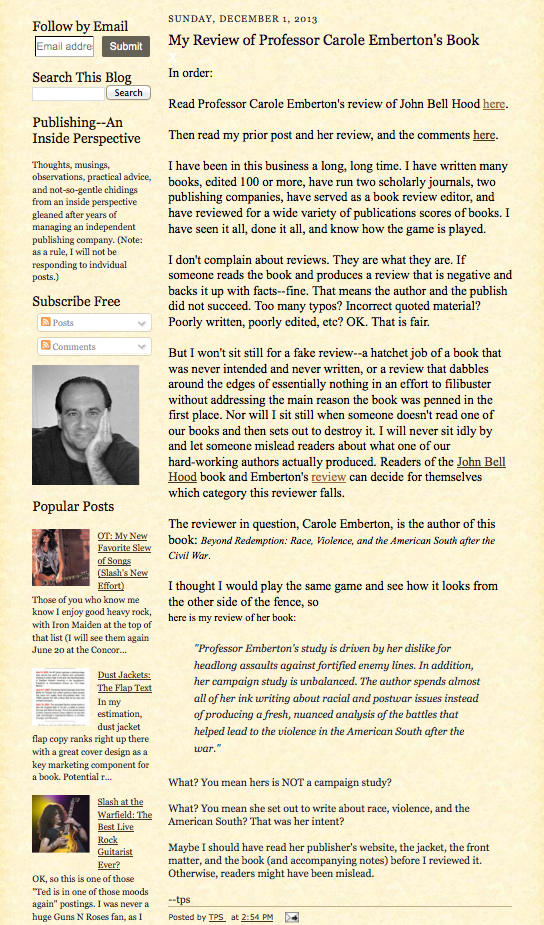 At some point every blogger experiences regret after hitting the publish button prematurely. You can delete what you have written, but that doesn’t erase all traces of the post. This is something I constantly hammer home to my students when using social media. The information is easily accessible if you know where to look. Ted Savas should have realized this yesterday as he thought through what he believed to be an appropriate response to a negative review of one of his books.

The screenshot to the right is that post. Perhaps he took it down after reading author Stephen Hood’s apology to the author of the review, which he posted on my blog and at The Civil War Monitor. It’s hard to imagine that at any time Mr. Savas thought that this blog post was an appropriate response, but there it is – the clearest window to date into his distorted view of this situation.

Now that Stephen Hood has publicly apologized it is only fitting that Ted Savas do the same. No one would care if we were talking about an anonymous blog, but Ted Savas is the founder and CEO of a reputable publishing house. You will notice that the blog is linked to the home page of his company’s website, which makes it an extension of that site.

His post doesn’t just challenge the integrity of a nameless reviewer, but that of a professional historian. Ted Savas has not provided one shred of evidence in support of his accusation that the author of the review did not read the book. There was absolutely nothing inappropriate about the review in question. Here is a reminder of what Mr. Savas has stated in the comments section of his own blog:

In the end, this professor did not read this book, and the fact that she did not and tried to pawn off a hit review is disgusting. If I was her dean, I would investigate and if I reached the same conclusion, I would fire her. She is unethical. This is the issue.

While Savas qualified the comment, this remains not only potentially damaging to the reviewer in question, but an embarrassment to Savas’s loyal customer base and especially to his community of authors. I would love to know what some of them think of this behavior. To me it does nothing less than sully the reputation of his entire publishing operation.

I know I speak for many when I ask that Mr. Savas put this to rest and issue a formal apology on his blog.

The URL for the screenshot: The cache URL: http://webcache.googleusercontent.com/search?q=cache%3Ahttp%3A%2F%2Fsavasbeatie.blogspot.com%2F2013%2F12%2Fmy-review-of-professor-carole-embertons.html&amp;ie=utf-8&amp;oe=utf-8&amp;aq=t&amp;rls=org.mozilla:en-US:official&amp;client=firefox-a

Previous post: How Not To Respond To a Review by Ted Savas and Stephen Hood