Catharsis and the Historical Imagination in Selma, Alabama 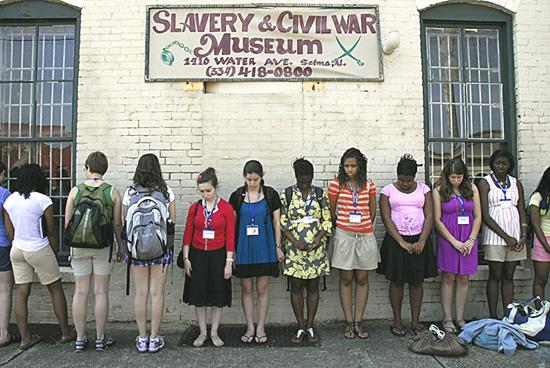 Student Group at Slavery and Civil War Museum in Selma, Alabama (not my school)

One of the highlights of my recent school trip through the Civil Rights South was walking across the Edmund Pettus Bridge for the first time in Selma, Alabama. The bridge is one of the most iconic images of the struggle and the film of the marchers being assaulted by police on “Bloody Sunday” moves me every time.

Before walking across the bridge our group took part in an unusual program at the Slavery and Civil War Museum [no website] in Selma. Rather than describe what happened I am going to share in full a description that I found online while searching for additional information about the museum.

The slavery museum in Selma, Alabama stuck with me like nothing else in my life. When we first arrived at the museum we were immediately forced off of the bus and separated into groups based on our sex. Our next direction was to put our hands on the wall and keep our heads down. We weren’t allowed to establish eye contact whatsoever.  I was told to frisk the other males to check them for “contraband”. Once I had to do that we were corralled into a small room males on one side and females on another.  Again we were inspected and after this thorough inspection by the leader we were then moved into an even smaller room with no light. From there we could hear screaming and yelling as though there were people being raped, murdered or otherwise. After a brief explanation of what would be happening to the slaves at that point [we] were we once again moved into an even darker room where there was the illusion of being in a boat. We had to sit down in a small narrow boat area with our heads down and without moving for close to 15 mins just to simulate to us what the slaves would experience during the middle passage portion of the slave trade.

After being subjected to that sort of treatment we were lead into a long dark hallway with a single red line down the middle which we were told to stand on and look down without making any movements. The “slave trader” went down the rows picking out what she referred to as the “good lil niggers”. As she went down the rows picking us out I accidentally looked into her eyes when I put my head up. Never in my life have I ever been as scared as I was in that moment, she gave me the coldest meanest look I’ve ever seen, she literally instilled so much fear in me I personally feared for my life. I was picked to my of my surprise and dismay because we were told that we had to pick another person that we perceived as slow or weak and push them to the other side of the line from us. At that moment I felt safe and special until we were told that there is no such thing as a “good nigger”. We were then told that we had to be punished because if we’d turn on our own that fast how long would it be before we turned on our masters and were sent to be punished. When we left the room the lady told us that we now had to act like we were getting whipped and brutalized and make sounds accordingly. Again we were lead into a dark room, the darkest one of them all and we were told to hang our hands as if we were being bound and hung by our wrists. When I started making noises and the group of slaves that were left on the line came into the room where I was I immediately broke into tears. Then the lady went into an act as if a slave master was raping her and/or her children were being taken from her. I then broke into uncontrollable almost hysterical sobbing.

Our own group’s experience was slightly different, but you get the idea. And as a quick reminder, the woman running this program is African American.

Needless to say, I am highly suspicious about programs of this nature and I don’t mind admitting that in this case I thought it was highly manipulative and even dangerous. The woman who runs this program is very professional and works hard to make a connection with each participant, but I fail to see how there can be any genuine historical insight beyond the emotions felt by each individual.

I can’t for a minute imagine this kind of activity being allowed to take place in Selma if the host of this program were a white male. There is also something deeply troubling about the assumption that an African American is somehow ideally situated to function as a vehicle for this kind of emotional experience. It makes about as much sense to me as descendants to Confederate soldiers who claim to intimately understand the wartime experiences of their ancestors and why they fought even without any evidence whatsoever. We can sit around and unpack our experiences at feeling intimidated, vulnerable, and frightened, but please don’t try to tell me that this has anything at all to do with the experiences of slaves during the Middle Passage. It insults the memory of those very same people.

At its worst this program ultimately functions as a cathartic experience for the woman leading groups through this activity. Perhaps there is some value to the experience as theater, but in the end I fail to see any historical value whatsoever.