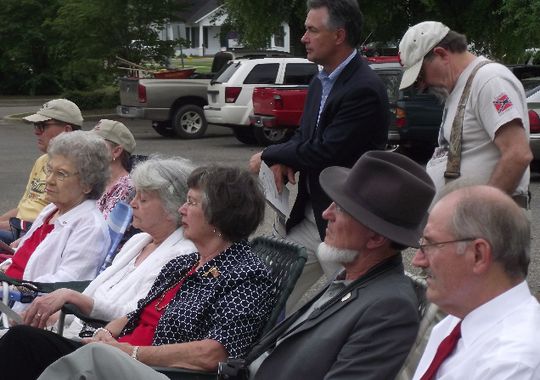 The leadership of the Prattville Dragoon Camp of Sons of Confederate Veterans, located just north of Montgomery, Alabama, had a less than successful Confederate Memorial Day commemoration this year. “I think we’re headed for extinction, judging by the crowd,” was the way group chaplain Tom Snowden summed it up. He went on to suggest that, “a degree of political correctness is being thrown into our brains, and it’s affecting us.”

Stuart Waldo, who is the camp commander, drew some comparisons between the Confederacy and the Ukraine in his address:

“Was the CSA simply ahead of its time; and would it have survived or at least had international endorsement, had the states seceded in the 21st Century?” he asked rhetorically. “The cause for secession was largely an economic one … caused by imposition of oppressive tariffs which disproportionately penalized the agricultural trade in the Southern region, the proceeds of which were disproportionately used in the northern region for infrastructure and industrial projects. Does that sound familiar?

“An eerily similar parallel can be observed today in the recent Ukrainian crisis. The Ukrainian people toppled their president after he refused to sign a trade deal with Europe, which provided a pretext to send in Russian troops. Russia wants control of the region’s natural gas fields. The international response has been that it is not appropriate to invade a country and at the end of a barrel of a gun to dictate what you’re trying to achieve. (Pres.) Obama has said that … the Ukraine is a sovereign, independent nation. Similarly, the states in the CSA were sovereign states who sought to be left alone, but the natural resources and wealth of the South …”

What the above address has to do with the Confederate soldier is beyond me, so it should be no surprise that SCV camps such as this one have been unsuccessful in attracting new blood. They are indeed heading for extinction, but this is part of a larger story of the greying of the centennial generation. You can see the same thing at work at just about every Civil War Round Table event. It will all be over within 25 years.

This doesn’t mean that interest in history is necessarily declining or that Americans, who have come of age in the past few decades, no longer find meaning in the past. It means they are finding it through other means.