“For Every Flag Removed…” 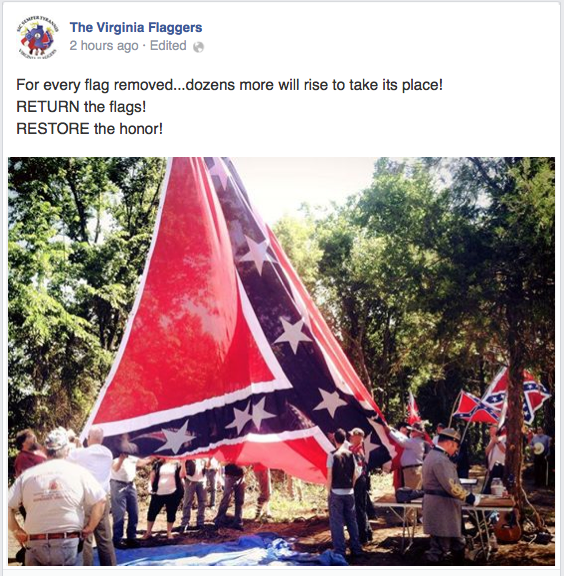 Here’s the problem with this logic. It’s not simply a question of whether or not a Confederate flag is flying on a university campus, public building or roadside lamp. Confederate heritage groups can organize and raise as many flags in response to their removal as they want, but they will never be able to counter what is really being rejected.

It’s not simply the flag, but everything that can legitimately be associated with it from the stated goals of the Confederate nation through the use of the flag as a symbol of “massive resistance” against black civil rights during the 50s and 60s and beyond. In removing the flags the communities in question are taking a stand and making public their values.

Raising another one on some remote highway or standing in front of a location protesting with a flag does nothing to address this fact. In fact, the retaliatory act itself is an admission that the battle has already been lost. A lone standing flag on the side of a highway has no community. It reflects no values at all since the landscape itself on which it stands is barren.

It must be a tough thing for those people who find meaning in the flag to see it rejected in so many places of late and by their fellow white and black southerners. The greatness of this country, however, rightly ensures that they will never be without their flag. They can always visit one of their flags, hold elaborate ceremonies, and rage against any number of -isms. In those moments they will have infused the flag with community.